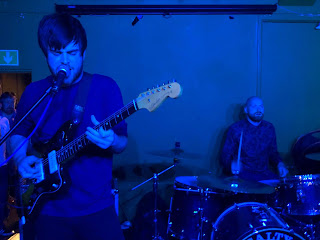 Déjà Vega opened up the North By Northwich Festival with an no-holds barred seven-song set in the Salty Dog on the town's pedestrianised High Street. An intimate setting for the Winsford band, they took the opportunity to win over new converts curious at the band hand-picked by The Charlatans as their semi-official support for their own show over the road at Memorial Court.

The crowd is a mix of the Déjà Vega hardcore fan-base and The Charlatans fans in town to see their heroes. The tiny room in The Salty Dog sold out in minutes and the sweltering weather outside meant the temperature had reached boiling point by the time Jack, Mike and Tom made it to the stage and launched into Telephone Voice. In this sparse room, the sort that new bands should be learning their trade in across suburban towns but which often have by financial means been taken over by tribute acts or, worst still, silenced by namby-pamby councils that take developer dollar over culture, Déjà Vega deliver a set with their customary energy, which always feels right on the edge of explosion - tense, taut and with a sense that even they don't quite know what journey they're about to take the listener on.

The likes of Mr Powder, Pentagrams and new single Eyes Of Steel are cases in point. Déjà Vega have honed their craft to the point that they can instinctively follow each other. A single glance can change the direction of a song, no more so than on their ten-minute closing symphony The Test, a song with so many faces technology would fail to recognise it as it veers from a steepling cacophony of noise to  something bordering on a techno beat without the electronic trickery. Jack, at this point, loses himself completely, words spewing from his mouth before his brain has even finished the thought process that created them. A guy in the front row waves his half-eaten burger in the air in appreciation as a mini mosh-pit ensues and half the crowd take a step back, partly out of fear, partly because the ferocity of the performance threatens to blow the venue's modest but well-apportioned sound system.

There's two new songs too, exploring new rhythmic ground whilst having the Déjà Vega DNA coursing through it. For a band suffering the disappointment of a debut album currently sitting on a shelf gathering dust due to record label issues, their creative spark hasn't been dimmed, in fact on the evidence of Precious One and another untitled song being played for the very first time, it's running freer and deeper than ever before.

Déjà Vega are quietly (except on stage) building themselves a reputation as one of the most formidable live bands around. Word of mouth is growing their fan base to the point that someone must surely take a punt on them in the near future and expose them to new audiences that will be equally blown away as those wandering over the road to The Charlatans. It won't be a minute too soon.

The 7" single of Eyes Of Steel, limited to 250 copies, can be ordered from their Bigcartel shop.