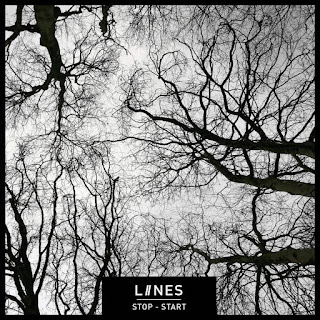 Stop - Start is LIINES' long-awaited debut album released today. To celebrate we asked guitarist and vocalist Zoe to walk us through the album track-by-track.

For me, this song is about someone obsessed by something or someone and all the anxiety that comes with this sort of experience: ‘What were you thinking? / What were you thinking? / Cos I can’t get over it / I can’t forget it’. It’s relentless and on loop, which I hope shows how it feels when those kinds of obsessive feelings develop and won’t let up. I wanted a song that made the listener feel like they were suffocating and almost relieved when it was over.

This song is about the frustration of not getting what you want and wanting to be noticed. ‘Why can’t you tell me? / It’s not fair / you never notice / I’m never there’. This is our oldest song. A firm favourite and show closer for us whenever we play live. This was first ever song released back in November 2015 and so means a lot to us and is the one we always finish our sets with.

I remember sitting on my sofa and coming up with the verse riff on this one. When I took this to rehearsal and we added the drums and bass it sounded immense! Better than I could’ve imagined. That was a great feeling. I aimed for similar variations when it came to the lyrics, which are about doing everything in your power not to lose someone. ‘And I try to pretend / I'm not gonna give up easy / I don't want this to end / I'm not gonna give up easy’

This was a slight change in direction for us. It’s a little slower but still holds the intensity we love to have in our songs. We messed around a little with the structure of this and tried to make it more angular to try and throw the listener off. The song feels like a departure and a journey ‘I just want to find something’.

I originally wrote this with a drum machine and an acoustic guitar. I played the drum loop through an ipad, pressed record on my phone then played the guitar over it. I then played the recorded version, set record on my iPad then overlaid the guitar in a sort of back and forth way. Very technical! It sounds almost like the xx on the demo. When this was taken to rehearsal, it really came alive.

This song is about missing someone. ‘Stop waiting for you? / I never could / you never come here / I wish you would’. What I love about this song is that it feels like all three of us a playing a different song but when you put it all together it just makes sense.

I actually dreamt this song. In my dream I was on holiday in Greece and watching a punk band playing it by the sea. I woke up (in Manchester!), ran to my guitar and tried to translate everything I heard. It a very very strange feeling to dream a song and it’s very rare but when it happens it’s an incredible feeling!

I wanted to create a song that had quite a rocky driven verse with quite a sad yet powerful chorus. I wanted the verse to be strong but the chorus to feel like loss and wanting. I think that’s how we feel sometimes. I’m saying what I’d be for someone ‘walk with me I’ll make you better / I’m holding onto you forever’ but ultimately they didn’t stay to find out ‘all that I had / now it’s gone’.

This was another change in direction for us and is one of our newest songs. We wanted to create a song that was repetitive and really stripped back. It’s the most exposed I’ve had my vocals and I love singing it live and having the freedom of not playing my guitar as much. It’s about faking composure with another person and ultimately still having more than them so it becomes real but you don’t really want that responsibility ‘head down and keep it together / you know me more than this / hold tight I’ll keep us together / I never wanted this’. I also started using a pedal at this point to try and create more atmosphere, something that made a huge difference to the recording when we started experimenting with this in the studio. Since then, I then started adding it to other songs to give them atmosphere and subtle lifts in certain parts.

This is quite a scathing song. It’s that feeling of complete emptiness and having nothing else to give and actually not really wanting to give any more of yourself. ‘Now there’s nothing in my heart for you’. It’s about giving up and not really minding. The closing of a chapter.

Some thoughts from Steph Walker, original bassist who completed the album with Zoe and Leila in 2017:

The most invigorating aspect of being in a band is the experience of playing live together on stage. Our intention, when we set out to record the album, was to attempt to capture this fairly indescribable experience. We strived to create a record that would connect with our audience in a real, raw and relentless way.

We’ve performed the 10 songs on this album, night after night, gig after gig. We have lived with them and they have changed shape with us as we’ve grown - inevitably creating the soundtrack to a large part of our lives. Having the opportunity to turn that into something tangible that we can share with our friends, families, fans, audiences and strangers is a unique gift.

"Recording the album last spring was a significant experience for all of us. For me, a year on from playing my last gig with LIINES in Dive NQ, when I hear the album I’m instantaneously transported back to a world of late night gigs; rehearsals in old mills; sleeping on strangers' floors in European cities; sipping whisky backstage from a shared band hip flask; the deafening pounding of the drums and the bass in the warm, windowless studio.

It is, for me, as much a personal memento of that incredible time we shared together creating and performing music, as it is a debut album. A treasured memory of a decade of writing and playing music with my friends."

"I don’t think there is much more to add other than to say we feel like there have been many more people than just the members of LIINES and our label, Reckless Yes, who have taken this journey with us. It’s amazing to hear and see people’s excitement that we have reached this really important milestone. And amazing to hear people that people are receiving it in exactly the way we intended.

To complete Stop-Start with Steph was incredibly significant for us, so it’s a proud day to be releasing it into the world as ours. And now we look to take this forwards with Tamsin and I can’t wait for some of the incredibly exciting plans we have in the pipeline."

They play Manchester Ritz (5, with The Membranes).