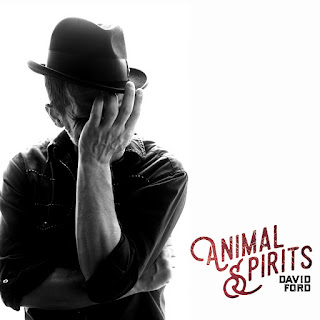 David Ford returns with his fifth studio album Animal Spirits, a collection of songs written about the concepts of macroeconomics applied to day to day situations. We asked long term fan Andy Sweeney to have a listen to the album and compose his thoughts.

Having been a huge admirer of David Ford's music for well over a decade now and a keen attendee at many of his spellbinding live shows over the years, I think it is fair to say that I have been very much looking forward to hearing his much-anticipated fifth studio album as much as every other ardent fan. Animal Spirits will be David's first full-length release in five years, so when I was given the opportunity to hear it before release for the price of a review, I didn't hesitate before accepting.

If you've been to any of his gigs over the past year, you'll possibly recognise a handful of these songs, as tracks such as Animal Spirits, We Always Knew and Real Damn Slow have already been give their live debut; possibly to gauge audience reaction, most likely just to give his loyal fans a taste of something new and to whet their appetite for the new record. Add to that Why Don't You Answer Your Telephone, which appeared on his The Union EP (2017), and the album already had a pleasingly familiar feel to it when I first sat down and listened to it for the first time.

Right from the moment you press play, it becomes clear that David's musical love affair with Tom Waits still continues unabashed, but, given his strong-minded individuality and compositional talent, some of the more stronger Waits influences simply add a smokier flavour to the Ford sound rather than making his music sound like some kind of earnest tribute. The opening trio of songs are all minor key, bluesy and, were it not for Ford's accent, could easily have emanated from the southern states of the USA. During his 2017 gigs, Ford himself billed this album about tackling the thrilling subject of macro-economics and, if I'm honest, I was expecting a lot more on the subject, but most of it seems to be dealt with in the bruising album opener, the downright magnificent Downmarket. The bristling troubadour vents his spleen in his own inimitable way, building up to a justifiably angry commentary on contemporary austerity politics, before breaking into an instrumental ending that features a multitude of guitars that just seem to howl with outrage.

“Well I say a plague on all your houses, sell a generation cheap,

Just to put nine figures in your pocket, say what's mine is mine to keep,

Stash it away on some secret island, far from the prying eyes and ears,

The bony fingers of the taxman and all his Marxist scrutineers,

Come on throw the money up the ladder, and tear the heart out of the town,

Do everything you can to block up the pipe so that nothing trickles down,

And when the house is left in ruins, swear to God it's structurally sound,

Ah yes we're all in this together, but some are further from the ground.”

It's a brilliant and uncompromising start to an album I believe fans everywhere will thoroughly enjoy... unless you're one of those people who have a few million buried away in the Cayman Islands, that is. Pleasingly, Animal Spirits sees a continuation of the careful attention to detail on the production, arrangements and instrumentation which made 2014's The Arrangement EP such a remarkable piece of work; It's All You, for example, sounds like it steps straight out of the soundtrack for a modern Western movie, tolling bells, whip cracks, whistling and all.

The title track's punctuating xylophone, strings and harmonica make sure the song is greater than the sum of its parts. Tell Myself It's Over, comprising of voice, acoustic guitar and strings, is a beautifully delicate heartbreaker and is one of the very finest moments on the album; there's even that lovely David Ford trademark touch, the music box introduction. Why Don't You Answer Your Telephone embellishes the angst-ridden vocals with a cellos, a cacophony of distorted guitars and, to top it all off, a scintillating guitar solo. As much as I loved Charge, his last studio album from 2013, I have to concede that Animal Spirits simply sounds sonically superior and it's like each instrument has been given a lot more breathing space to flourish.

Now for the bit where I add a “but”. Unfortunately, if I have one criticism of this album it's that there is a mild tendency for some of the material to come across as either a tad unoriginal and even a little self-referencing. For instance, the rhythm and percussive style on the title track, Animal Spirits, are strongly reminiscent of The Ballad Of Miss Lily from his last album, Charge. The chorus of the gently warming By Your Side has echoes of Waiting For The Storm, the melody and chord progression of We Always Know reminds me of the verse from Train (from 2007's Songs From The Road) and there's also the question of Real Damn Slow which, although I wholeheartedly admit is a fabulous track, has a direct lift, both in terms of bass line and tempo, from Come Together, a rather popular tune from Liverpool's most famous musical exports. While it's not enough to spoil the enjoyment of the music (indeed, that delicious Morphine-like saxophone and howling harmonica on Real Damn Slow give it enough individual character), it would be a little dishonest to speak about the album without mentioning those little niggles and the undeniable fact that, musically, this album doesn't always feel entirely new.

Thankfully, there is more than enough on offer to more than compensate for these moments within the songs themselves and the lasting impression of the album is of the quality songwriting, the remarkable standout moments and just how beautifully crafted it all is. The final song, I've Lost More Than I Ever Thought I'd Hold, is a wonderful example: instrumentally sparse and melodically simple, perhaps even a little under-produced, but beautifully genuine and life-affirming. Listening to that one and getting utterly lost in the emotion is a timely reminder of why I became such a fan of this man's music in the first place. Although I don't think Animal Spirits will usurp any fan's current favourite Ford album, David Ford continues to evolve as a songwriter and musician and has delivered an enduring, endearing, varied piece of work that grows in stature with each listen.

Favourite tracks: Downmarket, By Your Side, It's All You, Real Damn Slow, Tell Myself It's Over, Why Don't You Answer Your Telephone, I've Lost More Than I Ever Thought I'd Hold