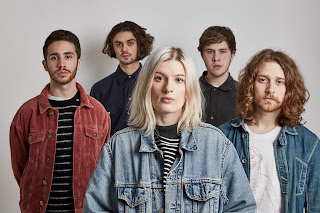 Newly-signed to Blossoms' Very Clever Records and with their debut EP Want Love fresh out in the world, there's a huge buzz about Fuzzy Sun at the moment. Although they can count the number of gigs they've played on one hand so far, they're about to go out on tour with their label bosses and pop up a whole load of festivals this summer.  We caught up with them for a chat about who they are, how they formed and what to expect next from them.

Hi, Fuzzy Sun, could you introduce yourselves and tell us how you got together please?

Me (Kyle), & Daisy previously played in a duo together, and I started writing songs that were quite different to what we were playing, so decided that too pull them off we'd need a full band. At the time I was working at a pub with Mitch and knew he was a drummer so the three of us got together and started things up.

We were searching for a guitarist and a bassist for a little while and we came across Lewis through quite an allusive ad online offering his services as a bassist, and coincidently he was moving back to Manchester the day we asked him to come to a practice and if just worked!

And the final piece of the puzzle was Raffi, I thought finding a guitarist would be the easiest, but it proved a little more difficult than first expected! Anyway, after quite a lot of looking Raffi was recommended through a mutual friend, he came down to one practice and picked the whole set up straight away, it was mad! So yeah it all just seemed to fall into place quite naturally which is great!

Where did the name of the band come from?

The band name I had for a while it comes from a wonderful EP called 'Halfway to a Threeway' by Jim O'Rourke.

Fuzzy Sun is the first track on the EP and when I saw it I just thought it would be a really cool band name, so as soon as the band was formed I put it forward!

The logo you've got is a pretty striking and recognisable one and fits well with your music and image.  Was that something you designed and was that intentional?

Yeah it was something I originally drew and then me and my mate Joe digitised it and changed it up a bit. Funnily enough we were actually listening to the bands demos as we did it, so rather than it being intentional I just think they were bound to be a product of each other.

A lot has been made about your debut EP being released on Blossoms' Very Clever Records label.  How did that come about?

Well we have been mates with the lads, individually, since school in one way or another. Once Fuzzy Sun started I remember Joe and Tom asking to hear some demos I had done, so I showed them and they liked the vibe. Just by coincidence they had some time off from touring so we started working on recording the songs.

How do you feel people have responded to that connection?

I think people have responded well. I mean you're bound to get people criticising, I think that happens with anything. But on the whole we have had a great response to the EP, and it was great getting to do it with your mates!

You're going out on tour with them in May.  To date you've only played four (five) shows at Night And Day and Jimmy's.  Is it going to be daunting standing in front of thousands at venues like the Apollo?

Yeah I suppose it is daunting, but at the same time it's so exciting and such a great opportunity for us! Playing venues like the Apollo are the places you dream of playing, so we are just unbelievably grateful we are getting to do it so early on in the bands career!

Could you tell us about the four songs on your Want Love EP please?

All the four tunes are simply songs talking about different stages of love affairs. 'Want Love' is about giving yourself to someone and it not being reciprocated. 'Sad' is simply the lamenting of a broken heart. 'After All This Time' talks of holding onto relationships gone by, with the dual vocals offering both sides of the story. And finally, 'Come Take A Bite' is a tale of seduction and new beginnings.


At your live shows, you've played the EP plus three other songs. As you're still in the fairly early stages as a band, do you have a load more songs ready or are you still writing songs for what will inevitably become longer sets?

We have other songs finished and we are also continuously writing, obviously the EP has just been released so we want to showcase that.

You've just announced a headline date at Soup Kitchen in May as well as a show as part of The Charlatans' Northwich takeover.  What other plans do you have post the Blossoms tour?

Yeah we are really looking to both of those gigs! And beyond that, we have a few festivals booked over the summer, we are doing Kendal Calling, Cotton Clouds & Festival No 6! So we are proper excited to get out and do those as well, it will be something new and exciting getting on the festival circuit!

One final question. If you had to describe Fuzzy Sun to someone who'd never heard of you, how would you start?

Hmmm, I don't know, I think it's important for people to make their own mind up, because they might hear something that we don't, or something we have never heard before. And that's the beauty of it!

In a nutshell I would say it's groovy pop music, but if you haven't heard us, check out our new EP 'Want Love', and come catch us at one of our live shows, and you can decide for yourself! 🌞

Our review of the Want Love EP can be found here.

They play a headline show at Manchester Soup Kitchen on May 19th. They also play The Gladstone Club in Northwich on May 18th as part of The Charlatans North By Northwich festival as well as supporting Blossoms on their UK tour.