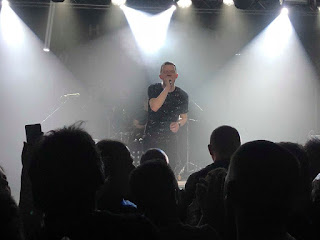 The seemingly unstoppable The Slow Readers Club bandwagon rolled into Nottingham and the iconic Rock City venue for the biggest show of their Build A Tower tour and the band took on the cavernous hall and made it feel intimate. Support came from SKIES.

There's a lot of love for SKIES in the Slow Readers Club fan base, with them having supported them on tour this time last year, and that's grown in line with the expansion of the Readers' hard core. It's not hard to understand why. SKIES have an energy and an ability to connect that makes it impossible not to fall for them. Their songs are constructed from guitars, drums and programmed synths, they talk about love and its trials and tribulations, even at the moments they're bouncing around the stage, whether it be one of the growing list of their own brilliant three minute bundles of unrestrained effervescence or their excellent cover of Enter Shikari's Live Outside which they make their own. 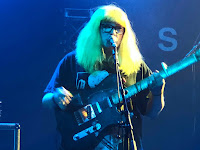 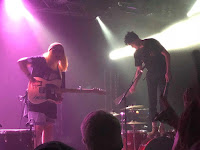 Recent single Pills is one of the stand outs as the lead track from their forthcoming EP with the simple title of X whilst the likes of Afterwards and Hold On show that SKIES are far far from a one-trick pony despite the limited tools they choose to utilise. As the set moves on you sense that people are getting drawn into them as the response to them grows. What's most noticeable though is the way their sound fills the room, like they belong in places like this rather than the more modest venues in which they usually ply their trade. There's a lot to love about this two-piece who are the perfect opening band to set the scene for what's to come.

The now customary selection of eighties synth classics precedes the Readers’ grand entrance tune – Donna Summer’s I Feel Love. We read somewhere on twitter a post that described their success as a lot of middle-aged people finding a band they could fall in love with again. And, whilst there’s still a smattering of youngsters in here, that’s quite an observant summation of what has propelled them so far in the last two years. The absolute adoration of this band is shown before they’ve even started to play as the “READERS” chants make it impossible for them to do anything but stand there and beam back at the sea of arms in front of them. This is their biggest gig out of their hometown of Manchester so far and it’s one huge celebration from the first bars of Lunatic that melts the crowd into one heaving mass of bodies down the front to the closing ones of Forever In Your Debt.

This is a big stage, the size of which outside of Manchester they’ve only played when supporting James two years ago, but they fill it and then some. Whilst they’re not (yet) at the stage of selling this sort of venue out, the downstairs is packed, and like previous nights the atmosphere builds as the set progresses and those on the fringes get drawn in involuntarily into the party and that’s exactly what it feels like. Aaron says at one point “thanks for telling your mates” when surveying the audience in front of him, testament to the power that word of mouth has had on the band so far. Once the national media belatedly catch on to what they’ve achieved to date, this is going to be the size of venues they’ll be selling out across the country and beyond. 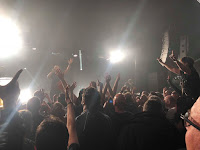 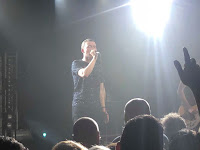 The benefit of these types of venue is the clarity of sound, which allows us to hear the detail in Jim’s bass lines, feel the lift that Kurtis’s backing vocals bring to many of the songs and the way in which David’s military drumming dictates most of what’s going on here. When they let loose on the likes of Lives Never Known, Feet On Fire and, in particular, that glorious tumble-dryer ending to Distant Memory, it feels like they’re shaking the whole of this iconic venue to its foundations.

There’s a sea of people lifted up on the shoulders of others, strangers hug and friends bellow the words eyeball to eyeball. This celebratory atmosphere is part of the Readers story, the sense of camaraderie between band and audience, fan and fan that is something we’ve never witnessed before and is genuinely magical in these troubled times we live in. During Block Out The Sun Aaron comes down to the barrier and is almost dragged into the crowd who surge forward to greet him. A fan calls Aaron over at the end of the song to tell him that he’s cancelled an important operation to be at the gig.

It’s those troubled times that are addressed in On The TV, a song that has taken on a life of its own and whose journey is just about to start. The crowd drown the band out singing the song’s riff, both at the start and when it hits the breakdown. Like so many of their songs, and why the connections they make is so strong, it takes human emotions and fears and expresses them simply but so evocatively, raw and open that you feel they’ve been written about you, whether you’re eighteen, thirty, forty-seven or sixty-five. One look around during the likes of Through The Shadows, I Saw A Ghost or the ecstatic You Opened Up My Heart shows just how much this band means.

Whilst Aaron gets most of the attention, it’d be remiss to note just how huge the band sound these days. Songs just surge at you from the opening bars and lift you up in ways that only illegal substances would ordinarily. There’s no respite, even the slower songs have an uplifting quality to them that ensures there’s no mid-set lull. The new songs, a week old in the majority of cases, sit alongside old favourites and blend together seamlessly in the set. And everyone knows every single word of every single song like they’re as vital to them as the alphabet itself.

The amount of sore heads and limbs in the homes and the hotels of the Nottingham area the next day will tell their own story, but for eighty minutes The Slow Readers Club created an atmosphere that’s got an almost cult-like reverence to it. They were once Manchester’s best kept secret, they’re now its most glorious export and it feels like this journey is only just starting.