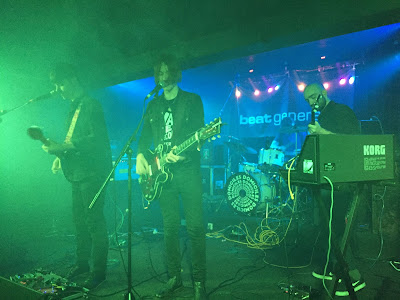 Dundee Promoters MAD Sounds put on a superb three band bill, with the DJ spinning some impressive tunes in between. Stuart Ralston made a return to Dundee to catch up with rising local stars The Roques and left being won over by Glasgow's next big things VLURE and an impressive headline set from Domiciles, on the opening night of their tour.

It's been a while since I caught local boys The Roques live. When I saw them previously, I was impressed with their mix of styles. For too long in Scotland young bands have been obsessed with churning out sub standard Oasis influenced rock. The Roques stood apart though and they clearly had potential. In the time since I last caught them, they have undergone something of a makeover. As they take to the stage, the DJ plays Fontaines DC, thus giving us an indication of where The Roques are currently at. Vocalist Brandyn urges the crowd to come closer as the five piece launch into their thirty minute set. Their opening track sees him on the barrier, engaging with the audience as the band around him craft out their own brand of post punk dominated by big bass lines. Fading Out soon follows and continues in the same vein with vocalist Brandyn delivering his lyrics with a menacing snarl. 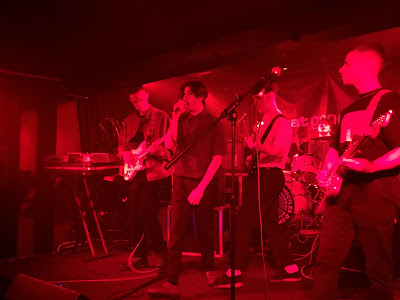 Addicted, their single from last summer, follows and shows a softer, more melodic side to the band. Recent single Valdivian is the set highlight for me and is much more potent in the live arena. New song Cry is debuted and features some swaggering guitars. They end their set to a great cheer from the crowd, most of them seem to be here to catch The Roques. The band have been busy making a name for themselves across Scotland, with support and headline gigs in Glasgow and Edinburgh, as well as numerous shows in their home town. Playing on this bill has clearly inspired them and we expect to hear more from them in the coming months.

Glasgow's VLURE recently featured on this blog as ones to watch in 2020. Given their growing reputation, generated from word of mouth (the band have yet to release a record), I couldn't pass up the chance to see them. They didn't disappoint. Opening with Desire, the band immediately make their presence felt, helped by singer Hamish, who wastes no time in stamping his authority on stage and around the venue. Indeed, he spends part of the set on the PA stack and joins the audience later on, singing straight in the faces of the crowd, looking for a reaction - not in a threatening way, but seeking a connection. Such antics could seem ambitious given that VLURE are still in their infancy, yet it shows they have a self-belief and a confidence that many more established bands lack. 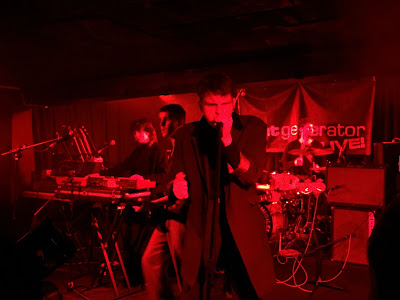 As the first epic tune ends, with Hamish half singing and half speaking in his broad Glaswegian accent, a punter is playing a mouth organ, thus generating much hilarity in the band. It's a rare light moment in the set, as VLURE thrive in another place. We Fall follows with Hamish immediately delivering another hard in your face vocal. Around him the band conjure up a dark post punk, almost gothic, disco sound. VLURE aren't a band to take lightly. There's both an intensity and a hunger from the band and you can't help being drawn in by them. As the set draws to a close, everyone in the audience is spellbound.

Domiciles close the show. Hailing from Fife, the five piece play an incredibly mesmerising mix of psychedelic garage rock. Playing shows around Scotland to promote their well received album This Is Not A Zen Garden, it is easy to get lost in tracks such as Six Degrees of Separation, For A Reason and Sinking Son. 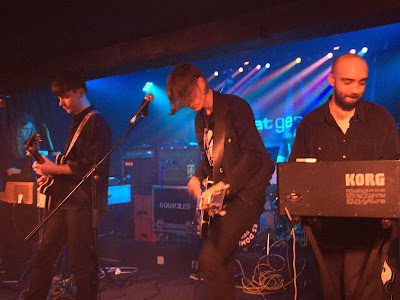 Their tunes are like mini symphonies. Frontmen Nick and Rory rarely speak throughout the set, but play some vintage guitars whilst their band mates add to the sonic perfection with their Korg synths. Domiciles' vision and appeal seems timeless, given the demographic of their audience. There are fans of all ages here who completely get caught up in the haze Domiciles create.

Email ThisBlogThis!Share to TwitterShare to FacebookShare to Pinterest
Labels: Domiciles, The Roques, VLURE