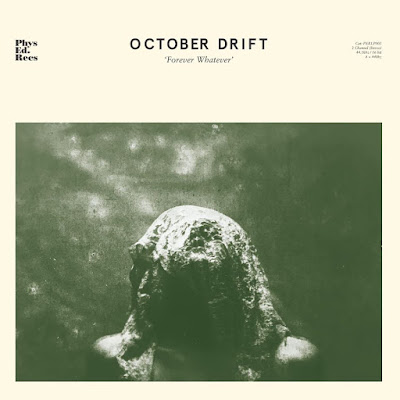 October Drift today release their long-awaited debut album Forever Whatever. We caught up with them for a chat about the journey they've been on as a band, the difficult decisions in selecting which songs to put on the record and plans now the record is out there in the world.

It's been six years since you became October Drift and you'd previously been The Darlingtons, how does it feel to finally have your debut album out there in the world?

It's been a long time coming! We're certainly not an overnight success and it's taken a hell of a lot of work to get here. But being able to finally put our debut album out to the world feels like the culmination of the last decade of our lives. It's an odd feeling to be building up to one moment for so long and then all of a sudden it's over. But to be honest we see this as the start of something rather than the end. A platform to push on and show a wider audience who we are.

Where and with who did you record the album?

It was recorded in Doncaster with Justin Lockey of Editors. There's a lot of history between Donny and our band, so it was a weirdly appropriate coincidence that we ended up recording our debut there.

You've been in the studio to record singles in the past.  How different was it going in with the aim of recording a full album rather than just one or two tracks?

It's been a long time since we've worked with an outside producer. Before we've mostly recorded ourselves, so it was great to have someone else's ears and ideas. Sometimes I think you can be too close to a song or idea and it takes someone to come in with a different perspective, with no sentimentality to get the most out of it. Right from the off Justin had a clear idea as to how he saw the album being and so we just let him have it. The only thing I regret is letting him keep the studio at 30°C for the whole process! He reckoned it made everything sound better...I question the science behind that!

Your live shows are very visual and this adds to the music. How did you try and capture the energy of the gigs in recording the album?

We tried not to over-analyse anything. The whole album was recorded in a week, which meant we had to work at a pretty fast pace. I guess that helped to keep the spontaneity of things and stopped us getting too bogged down in minute details. It was more about working fast and capturing the energy of our performance.

As you've been a band for so long before recording your debut album, how many songs have you written and how did you go about reducing them down to the songs that make up Forever Whatever?

Far, far too many songs! God knows how many we've written over the years, but I think we sent about forty which we were happy with to Justin. We were keen to hear his opinion as to what he thought should be on the album. He came back with thirteen tracks he thought we should record, so we did and then whittled it down to ten. To be honest there wasn't much of a debate about which tracks should go on - we kinda all felt these ten were right to go on the debut. We've written some really weird and more experimental stuff, which we all agreed should probably wait until about album five.

Were there any that you particularly loved but just didn't fit the mood and flow of the others?

Yeah loads. But they didn't feel right for this record. I'm sure they'll feature on another album though.

And have you continued writing since you recorded the album?

Yeah constantly - I think it's an illness! We built our own studio in 2018, where we spend far too much time. When we're not away touring, we're up there several times a week. Not sure how many we've written since the album. Maybe ten to fifteen?

Bands take a different approach to track listing their debut album. Some will record a brand new set of songs, some will mix old favourites and singles and new songs.  You chose the latter, do you think it's important that the new fanbase an album should bring are aware of songs like Cinnamon Girl and Cherry Red?

I think we felt those songs never got the mileage they deserved. But we didn't put them on the record just because of that. We said we were only going to put old songs on there if we feel we can improve them by revisiting them - which I think we did. We're not the kind of people who like to look backwards and I think that's one of the reasons why we've been doing this for so long.

You chose to name the album after one of the songs Forever Whatever. Was there a particular reason for that?

It just felt right. Something about that lyric seems to fit our band and the journey we've been on together. We're the ultimate slow burner and if it takes forever to get to where we want to be, then so be it.

And where did the idea for the album artwork come from. It's an unusual looking cover photo for you to choose?

It's by our friend Zahra Hoccom and was part of her Veil series. We just thought it looked cool as fuck and were lucky enough for her to let us use it.

You're going on tour in February.  Will you just be playing the album or will there be older and brand new songs on the setlist as well?

We'll play the whole album plus a couple oldies. Gotta pad the set out otherwise we'd be walking off stage after 40 minutes!

And what are your plans for after that - do you have more tours and festival performances lined up?

Nothing we can announce at the moment. All I'll say is that this will be a very busy year. Which is good cause we all start to lose our minds a bit if we are home for too long.

If you had to persuade someone who'd never heard of you and Forever Whatever to listen to it, where would you start?