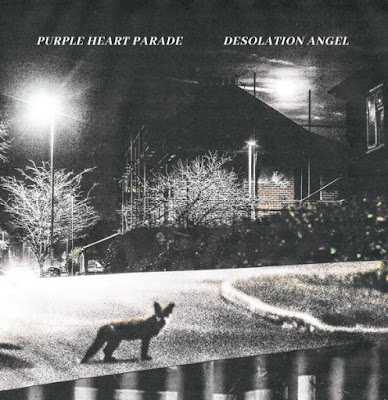 Manchester's finest purveyors of psychedelic pop return with their third EP Desolation Angel including recent single Petrichor. Stuart Ralston has a listen and declares it to be their best work yet.

Purple Heart Parade have long been at the centre of Manchester's burgeoning psychedelic scene. This new EP - their second for the Club AC30 label - cements that reputation. Last year's Lonestar EP was universally adored by all those who heard it. Of the last record we said "the Lonestar EP is a massive leap forward" [from their debut] and once again, their latest release eclipses that! Once again the band have teamed up with legendary producer Pat Collier to produce a stunning collection of blissed out psychedelic nuggets.

Getting underway with Petrichor, the band pick up where they left off the last time - giving us a beautiful five minute, blissed out epic, which simply soars out of your speakers. The rhythm section (Ste on bass and drummer Chris) dominate the piece. It's the sort of tune that Purple Heart Parade do so well and it's easy to imagine late night festival crowds getting lost in epic tunes like this.


Sister Libra is much more in your face, with some great juxtapositioning throughout. There's moments of relative calm before the pounding, reverberating guitars of Taos and Sam come hurtling in. Sister Libra, to me, is reminiscent of Loveless era My Bloody Valentine - high praise indeed.

Red Rose County slows it right down again and Pete's angelic vocals dominate before Starwheel takes over and takes the band in a new direction. It's much more pop orientated than its predecessors. Starwheel reminds me of the euphoria and optimism of classics like Made of Stone and Mersey Paradise.

Title track Desolation Angel has been a favourite of mine since I heard it live at Soup Kitchen last year. Opening with just organ and bass, creating a joyous swirling haze, before the rest of the band come in. There's a fragility to Desolation Angel and the band could easily craft out another big sonic landscape but instead they pull it back and deliver a beautiful, delicate masterpiece.

Running at over twenty-five minutes, the Desolation Angel EP is almost a mini album. It is sure to delight the existing loyal and loving Purple Heart Parade fan bass and win over legions of new followers too.

The Desolation Angel EP can be preordered here.