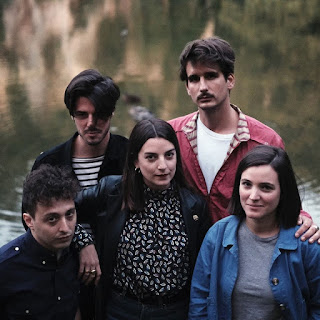 In / Out is the final single from French band En Attendant Ana before the release of their second album Juillet that is released next Friday (January 24) on Trouble In Mind Records. It's a gloriously upbeat indie-pop gem that will feel familiar yet hard to place musically whilst Margaux's accented vocals give it an enticing charm all of its own that will keep you hitting the repeat button on the track.

Margaux has described the album - "I tend to consider it as a journey towards acceptation of losses (would they be friends, lovers or dreams through death, departure or disillusion) but also towards self respect and independence" and In / Out feels like the point where decisions are being made. The video has an interesting twist to it as well, shot on Super 8 cameras in Brussels where they met Ana several years ago, a waitress who unknowingly gave them the name of their band, and who appears in the video as they go and find her.