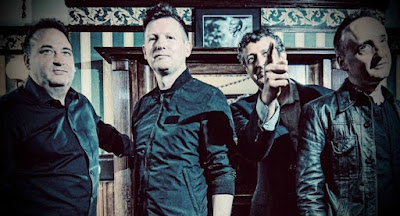 Following a couple of low-key reunion shows last Spring and a series of Starshaped Festival performances in the summer and the reissue of their Further and Weather Underground albums late last year, Geneva head out on their first short headline tour of the century in Brighton, London and Glasgow at the weekend. We caught up with front man Andrew Montgomery for a chat about how the reunion is going.

You're just about to do your first headline date tour for twenty years. How is the mood within the Geneva camp as you're going through rehearsals?

I think everyone is slightly anxious but looking forward to the shows. I mean, in one way this is a bigger deal than StarShaped in that it stands and falls on us, rather than being part of a bigger thing. But really, to have got this far after so many years away is great, and a triumph of scheduling and organisation, what with everyone's familial, professional and geographical commitments! It's been good running through songs old and new.

You're pretty spread out geographically. How have you managed to find the time to get together to rehearse?

Yeah, exactly! Well, Douglas, Steven and Keith rehearse more frequently as they all live in or near Edinburgh and I've been learning or relearning songs from distance, and have been over to rehearse. But there's maybe a slightly riskier element to it due to the circumstances. Did someone say 'how rock and roll'?

The end of last year saw the reissue of your two albums Further and Weather Underground. How important was it to get them back out on record shelves for people to listen to given that they've been physically unavailable for so long?

I'm not the world's biggest fan of looking backwards, but I think the rereleases were necessary and very worthwhile for the availability reason you mention, the chance to try and reach newer fans who maybe hadn't heard of us, and they were not just a straight repackaging job, as your next question refers....

They're pretty impressive packages, full of b-sides and unreleased songs even on the vinyl, which is different to the way many bands around the same time as you reissue albums with as little as possible added.  Was that something that you insisted on - to give people a fuller picture of what Geneva were about?

Yes, absolutely. We all agreed on that, but I really must praise Keith above all here. He's always been the band's unofficial archivist and that shows in the passion he had for the project. I was a backseat driver the whole way, and it wouldn't have happened without Keith's engagement. The man has the patience of a saint. The other guys and our manager David Laurie also played their parts.

As you went through the track selection process were there any particular songs that stood out and made you think you should have done something differently with them in terms of releasing them and things might have worked out differently?

I can only speak for myself here, but it would've been interesting to imagine the Weather Underground tracks as produced by Mike Hedges, even though I really liked what Howie B did. Would Mike have smoothed out some of the wrinkles and unified the sound as per Further, in a way that the end product of three different producers meant Weather Underground could never be? I also wonder what the album would've been like with Promised Land on it, as I for one thought that was a racing certainty, but the record company had other ideas. Still, we finally got to release it all these years later!

When you played the Starshaped Festival shows last summer, you didn't just play the obvious tracks, but played some of the b-sides and unreleased tracks. Was that a conscious decision to try and mix it up and not be predictable or did those songs just jump out at you when you were making the decisions?

Yes, we definitely wanted to play some of the less obvious songs, because we're proud of many of the B-sides we wrote, especially for Further when we were working with Neil Simons, a very talanted producer/engineer who we really clicked with. (Glad to say Neil has been at our shows recently and is a great guy). But to be honest, we also wanted to play these songs to make it as interesting as possible for us, too. Variety, and all that...

And can we expect more of the same for the three shows you're playing in Brighton, London and Glasgow?

There's been hints at new material at points since you announced getting back together.  How is that progressing and will we be likely to hear some of it at these shows?

Maybe we'll play something, though it's still earlyish in the writing process and sometimes when you play something that's not ready it can strangle it at birth! (sorry for the grisly metaphor)... But you never know. We have a good few ideas on the table already.

How has songwriting been given it's been so long since you've been in a room together being creative - and how do the songs compare to the back catalogue that people know and love?

These are very perceptive questions! What are you on?! :-) Can I get my lottery numbers, too? ...Yeah, it was slightly daunting at first - opening yourself up for songwriting can be quite a vulnerable process at times, especially after all these years, but the spark is there, and it's getting brighter all the time. How do the new songs differ? Dunno exactly. Maybe less highly strung, though they're certainly not lacking in Geneva-style grace and drama.

Appreciate it might be early days, but are there any release plans or further touring planned?

Let's see how we get on with this wee run of dates and take it from there, though I'd like to think we're on the way towards a new chapter :-)