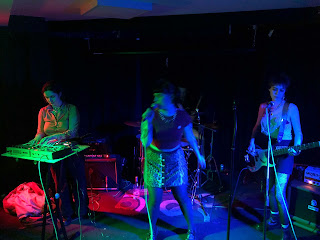 The Red Stains opened up what promises to be a busy 2020 for the band we included in our tips for the year with an early set at Manchester's Peer Hat, unveiling a new song and delivering a feisty punk set of three minute hit and run punches to the gut.

If you want perfection, The Red Stains are not your girls and boy. Too often these days music is sanitised and cleaned up and the raw energy and emotion in the playing and the lyrics is covered up by a glossy sheen that after a while becomes anonymous and boring. The Red Stains discard any such vanities and deliver a set of songs that make up for what they lack in rigid structure and occasionally coherence with an energy that's impossible to ignore - whether you love them or hate them and you'll be in one camp or the other as they'd push you off the fence if you tried to sit on it.

Whilst Natalie is going wild at the front, throwing out lyrics about shopping (Freezer Jesus), being used and dumped (Mannequin) and her fixation with public transport (Pacer Train and Jump The Met) and demanding that you listen to her, Sterling on bass, Ella on synths and Ben on drums play on building the sharp spiky platform for her to stand upon. It's raw and edgy and full of imperfections, including false starts, but that's all part of their charm - this is them being natural, being themselves and creating something that talks for them. 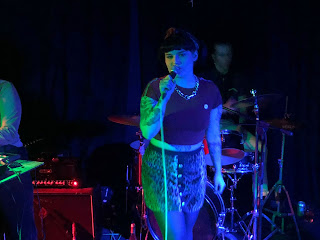 They open with a new song TV Static, a rumbling menace running through it and concluding with a screaming repetition of "turn up that dial to self-destruct" that comes out of nowhere and takes us aback. It's very much got The Red Stains vibe to it, but feels like a progression too. Mannequin is really developing into a stand out track, Ella's keys dance around and keep the listener on edge as Natalie's declaration "I'm a mannequin, just a body" gets even more frenetic the more she repeats it. Trolley Dashers is propelled along by Ben's drums, a repetitive beat that has you involuntarily tapping your feet as it careers along.

There's a spontaneity to all this, particularly in the between song chat that involves good-natured hecklers and talk of missing verses and choruses and £1.50 bottles of Lambrini, that's refreshingly different about The Red Stains and which the audience warm to. Jump The Met is a playful two-fingers up to the system and it's followed by a cover of The Fall's Totally Wired, something the four of them very much seem to be as they give their own interpretation on one of the city's classic songs. The chaos of The Red Stains makes it an appropriate song to cover given the unpredictability and uniqueness of Mark E Smith and it's that the crowd warm to. Love or loathe them the last thing they will ever do is bore you.