TRACK OF THE DAY : Car Crash - Them Not Us 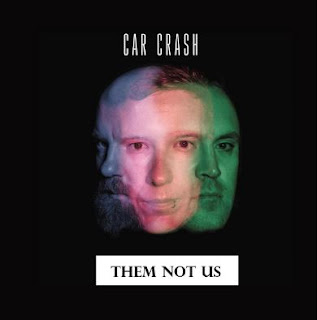 Them Not Us is the debut single from Dublin post-punk four-piece Car Crash and is taken from their forthcoming album Blindspots due out in February. It's a caustic put-down of those who live in their echo chambers, incapable of any rational debate of anything and stuck in their own mindset - a damning reflection on what passes for social and political analysis and commentary these days.

Lyrically it takes aim at the nonsensical nature of much of the debate that goes on via social media channels - "Everybody's arguing over absolutely nothing. On the internet there's a lack of intellect"- before rounding on the insular nature of the people who inhabit such places - "I can't be friends with anybody who doesn't agree with my point of view..... echo chambers of confirmation bias" and the on-going debate that seems to be as prevalent to them as it was in the UK election recently - "support Palestine, you're an anti-semite, support Israel, you're an islamophobe."

Add to that their bio that describes them as "Close your majestic eyes and picture Talking Heads smashing into a factory of cymbals, while U2 are doused in petrol and flame grilled on the roof... then and only then will you be close to the sound of Irish post 9/11 punk that is Car Crash" and the statement that it will deal with subjects such as Tinder dates and conspiracy theories, Blindspots promises to be one of the best releases of the year.

Blindspots is out on February 14th and can be ordered on blue or pink vinyl here, limited to 150 of each, and with 30 purple vinyl to be sent out at random.