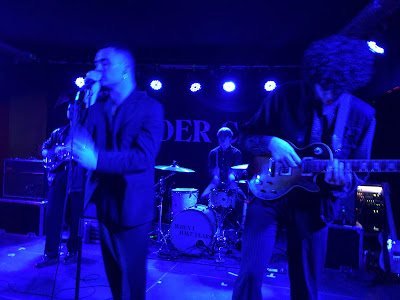 The second night of The Murder Capital’s European tour saw them hit Munich’s Strom on Saturday night for an adrenaline-fuelled set of tracks taken from their When I Have Fears album.

There’s an air of expectancy and curiosity as the band take to the stage with seasoned fans and those to who the band are new both having a sense of anticipation. They launch into Green And Blue, a change to the setlist they toured last year where they started with Slow Dance and On Twisted Ground which gives the gig a very different dynamic. The song’s expansive vision giving shape by Diarmuid’s tight rhythmic drumming makes it the perfect opener as it captures so much of what makes this band special.

“This is a celebration of death” James tells us before we dive headfirst into Don’t Cling To Life, a song that gets the crowd moving and the heart beating faster. Its command “failing this let’s dance and cry” feels so apt in these troubled times despite its meaning in the song being a personal one. For Everything is fierce, the opening instrumental section builds in tension, James bashing the tambourine, eyes fixed dead ahead until the song explodes and takes us off on another path.

The pace is dropped for the two-part Slowdance and On Twisted Ground. The former shows The Murder Capital innate ability to capture and control the audience’s instinctive emotional response to their music. On Twisted Ground starts with Gabriel’s beautiful aching bass as they wait for the audience to become silent before James once again bares his soul in the most vulnerable manner. There’s a beauty and a strength in being able to express such dark thoughts to strangers and it’s what makes The Murder Capital such an important band. 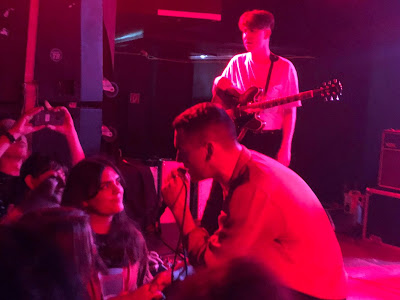 Love Love Love changes the pace once again and the crowd start to let loose and dance. James demands “more more” from us before jumping off stage and sitting down in a circle cleared for him before leading us in frenzied moshing. Before the final Feeling Fades the band bid us to crouch down as they tease us with the intro for a minute or so before we, and they, lose themselves in the music, James hoisted up on a sea of arms above us yet still singing. The roar for an encore is deafening but this is a band that don’t deal in fake gestures.


There’s a bond they create at their live shows, whether it be the tenderest moments like On Twisted Ground or when James stoops to sing directly to a woman in the front row or the impassioned energy of the faster songs that allows them to deliver their message that love of those close to you is the best antidote to anything the world might throw at you.