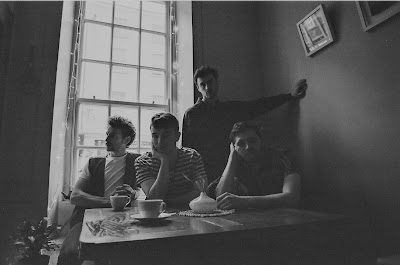 Odd Morris are one of a plethora of bands emerging from the fertile Dublin scene at present, but like the others are following their own path. Hot on the heels of their first two singles What Might Be and Lilac Leaves comes their first release of 2020 entitled Cold Water.

The band talked about the accompanying video to the single, a feeling many can relate to in their own hometowns when they come across familiar places - "It is a day-in-the-life-of situation, filmed where Daragh lives in Dublin's city centre. I just had a basic idea to follow a character on his daily routine whilst something is niggling him at the back of his mind. It's all very close and domestic in ways, the male actor is my flatmate and parts are filmed in my room. Other parts are filmed on bus routes that we all took as young kids. Being from Swords in North County Dublin, a trip into the city was butterfly-feeling inducing as a toddler, and living there now, I often get that feeling as I turn the corner on Hill Street from Gardener Place. The old street lamps are enough to stop me in my tracks. We really have a grounded love for Dublin's North Inner City, and coming from our previous video for Lilac Leaves which was all filmed indoor, this time we wanted our character to be outdoors, breathing-in and roaming the city."