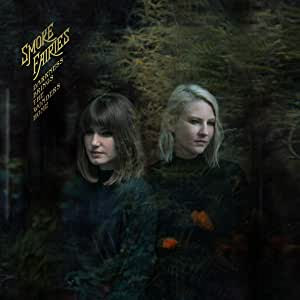 Darkness Brings The Wonder Home is Smoke Fairies' sixth album, their first since 2014's self-titled fourth album and their Christmas-themed Wild Winter records. It's an evocative descriptive record to mark their comeback, bringing guitars very much to the fore to act as the counterpoint to the often mysterious and dark lyrics that run throughout.

On The Wing opens up proceedings and sets the album's stall out early. Jessica and Katherine recorded the album in Seattle and there's elements of the city's sound in this record, a harder edge to it than its predecessors, yet without discarding their ability to craft swirling soundscapes that draw you in and lyrics that are doused in mystery in parts and sublime clarity in others. On The Wing evocatively makes references to birds throughout - "did you wake with feathered skin?" and "got talons growing from your legs" - using metaphors to cleverly create visions in the listener's head.

The last single from the album Elevator announces itself with a bold guitar riff and lyrics that use analogies of travelling in the humble lift to describe the ups and downs of something more serious than a passing glance. The chorus declares "It goes up and down, from each floor to ground, makes a ringing sound, what are you so scared of?" whilst as the song progresses they get "stuck between floors, between my mind and yours" to describe the emotional no-mans land that we often find ourselves in. Disconnect deals in the wish to switch off from the world, close down the mind and free oneself from all the trials and tribulations of life and find some peace - looking for the other party in the song to teach them how to distance themselves from everything - "lost in your own world, you're looking for no one." Musically there's an edge to the song, like what's gone before, the guitars at the forefront.

Coffee Shop Blues slows things down, although there's a rigid strength to the music with the guitars taking centre stage again that ensures that the song never drifts, a reflecting reminiscence of youth as time moves on, unsettled and constantly shifting to try and find happiness - "I lost it too soon, I was only 19, I 'd only found my scene, all wrapped up in coffee shop blues, I wanted life more than anything." Left To Roll starts with delicious vocal harmonies that contradict the darkness of the lyrics to which there's a restlessness and uncertainty that runs throughout it - "Can you say you’ll stick with me until the seas have dried? Not if you can’t cure my wandering mind." This is particularly evident in the song's extended middle section where there's a juxtaposition between the harmonies and guitars that creates a tension that doesn't need words to express it.

Out Of The Woods conjures up images of dark woods and forests, all tangled roots, cold and rotting leaves and "spineless things" as an analogy for the intricacies of modern-day relationships, demanding of the song's protagonist "when you going to come out of the woods? come crawling through the trees." The vocals add intensity to the words, the crisp production on them ensuring each intonation adds impact to their meaning. The album's most succinct lyrics come on Chocolate Rabbit - "You’re like a chocolate rabbit, you're hollow inside, you leave me unsatisfied is simply descriptive and dismissive of the song's subject although as the song progresses the rabbit is being pushed away from the complications of the potential relationship to where life could be sweeter.


The dramatic tension returns for Chew Your Bones, the instrumental opening section setting the tone for the rest of the song as the opening line asks the question "what did you see when the lights came up?" and then the song gives up the album's title. It's a song that holds your attention as you're drawn into it and unable to escape. Don't You Want To Spiral Out Of Control picks up the pace as the title's question is posed on the back of the statement "if you've got a hole to fill, you've got to make the kill" as the guitars create a spiky unsettling atmosphere throughout the song like ideas running through a restless mind. The album concludes with Super Tremelo, the album's most intense moment as there's a claustrophobic cloying feel to the words that come at you as they question sanity in a world of noises in the darkness and the buzzing of fluorescent lights as insomnia and bad dreams kick in.

That Darkness Brings The Wonder Home got made at all feels like something of a triumph, the nature of the industry now set against artists that are more focused on their art than sales figures. There was always something magical about Smoke Fairies, particularly live, that stood them out from their contemporaries yet that doesn't pay the bills. Yet this feels from the very start like a record they had to make, to get out of their system. It has a harder edge than most of their work to date yet achieves this without diluting their uniqueness or their message.

Darkness Brings the Wonders Home is released on January 31 and there is an exclusive Dinked edition available at some independent stores as well as a gold signed vinyl available from their store.