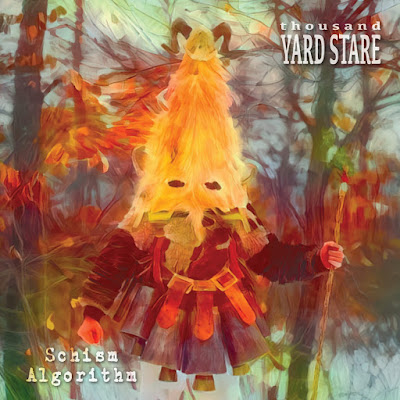 Even The Stars favourites Thousand Yard Stare start the new year off with a sparkling new single, Schism Algorithm and the promise of a new album The Panglossian Momentum later in 2020.

Incredibly, it's thirty years since Thousand Yard Stare released their debut record, the classic Weatherwatching EP, which featured one of my favourite tunes ever - the six and a half minute epic Wonderment. After delivering two albums in 1992 and 1993, the band split yet they retained a fanbase. The one off reunion in 2015 has so far yielded festival slots, tours, a live album, two EPs and a single late last year.

Schism Algorithm shows a shift in style from previous single It Sparks, which was released back in October, yet retaining the charm we expect from Thousand Yard Stare. Opening with some impressive drums and bass, Schism Algorithm is a groove based jam, thus marking a departure from their recent work. Stephen's vocals sound as fresh as ever whilst guitarists Giles and Kevin go for a more Led Zep sound. It's distinctly Thousand Yard Stare and sounds like the perfect introduction to a new long player.

The song's subject matter is the way we're being increasingly controlled and influenced by technology as Stephen explains "Our increased reliance on the digital sphere to shape our beliefs has invited opportunity for those with the power to harness it. The powers that be have always been master-peddlers of deceptions, and those with the means and motives to create defacto truths from fabrication do so with increasing impunity and anonymity. This song is about putting this ‘ghost in the machine’ in the confession box"