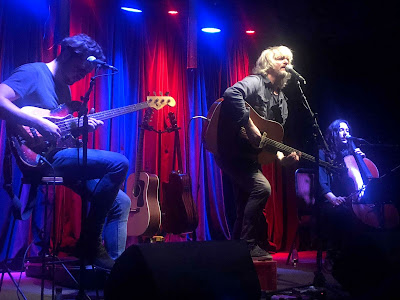 John Bramwell opened up what promises to be a busy 2020 for the former I Am Kloot frontman with a sold out intimate seated show at Hebden Bridge Trades Club on Saturday night, mixing I Am Kloot favourites with songs from his solo album Leave Alone The Empty Spaces and its forthcoming follow-up. He was supported by Dave Fidler performing tracks from his two albums I'm Not Here and Songs From Aurora. 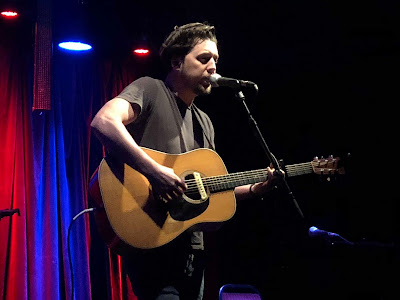 Dave Fidler has opened John's shows for a few years now and plays in his band The Full Harmonic Convergence and is later described by John as "my best friend" - but he's here on merit, as John succinctly describes him as "bloody brilliant" as he introduces Dave's twenty-five minute set. His songs are simple, direct, personal and aim to tug at the heartstrings and they succeed in doing so every time, whether it be Reassured from his debut I'm Not Here or On The Line and Skylark from his Songs From Aurora album that was released last year and most of which was written in a campervan, as part of a song a day challenge over the course of a month, these songs feel natural and
rich in emotion.

He invites his son Dylan to come up on stage and beat box to a song called Easy Gone Easy Come which he wrote when Dylan was a baby in the style of Bob Dylan for his then new-born son. It's a beautiful moment that has most of the audience swooning in admiration and love - and it feels like a reinvention of the song, testament to the endearing qualities of his songwriting. A new song All The While gives an insight into what might come next, a folk / country shading to it that accentuates the emotion in Dave's voice. The audience, respectful and quiet throughout, love him and it's not difficult to see why.

This sold out show takes John into double figures for nights at the Trades, which is starting to feel like his second home since he first played here back in the summer of 2013, a gig that was captured for his Live At The Trades album. You sense many of the crowd have been to most of those shows yet still never fail to be captivated by the old jokes, the off-the-cuff ones and the unpredictability of the setlist and performance. When he says "no two shows are ever the same" he means it.

Tonight feels particularly poignant. There's moments where John talks about his parents and those of us in the room of a similar age all know exactly what he's talking about because we've experienced what he tells us about too. It's this disarming honesty and the way he addresses difficult subjects in song and between songs that attracts people to him and engenders loyalty from his fans - and he laces those words with humour as well as pathos.

Before he even plays a note, he has us in stitches. He explains to us that his flowing locks are still in place because he only has his hair cut once a year at the start of the year and this is the earliest he's played a gig in years - and when he phoned his hairdresser Joan three days ago she was in Tenerife - before joking about folk convention when he puts his guitar strap on. It's moments like this where John distinguishes himself from many of the other songwriters on the circuit - there's moments he misses lines and recovers, improvises new parts to songs, the harmonies outro to Fingerprints being one particular highlight, and takes audience requests for songs he hasn't played in a long time (laughing that he likes it when it's one he knows). 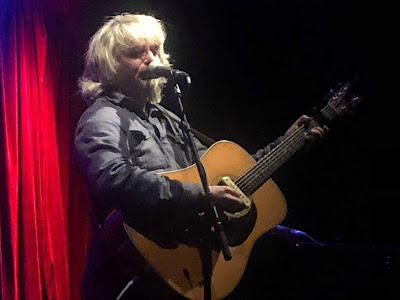 The opening section is I Am Kloot songs performed solo - Mouth On Me, Bigger Wheels, Fingerprints, I Believe and At The Sea - stripped down to their bare bones, accentuating John's often underappreciated guitar work and the stark dark nature of the lyrics. He breaks out laughing when the audience mistake the start of I Believe for Northern Skies and then when he introduces Dave Fidler and cellist Harriet Bradshaw who he describes as "the big H, the best fiddler" which sends him, and most of us, into hysterics.

The three have a real intuitive way of playing together, the others atuned to John's unpredictability and capable of grasping it and going with it. He gets into a playful argument with an audience member who shouts that Sky Full Of Thunder And Lightning isn't brand new because it was played at The Ritz in November. When the interaction subsides the song starts accapella until Dave and Harriet come in to play and add backing vocals that give light and shade to John's acoustic and vocals. It's got a warmth and optimism running through it that you wouldn't have historically associated with John's work, although it's still shot through with a sense of reality. There's a sparsity to Who Is Anybody Anyway, where the juxtaposition between the acoustic guitar and cello creates a wonderful tension that sets the hairs on our neck on edge. Leave No Traces and Days Go By also possess that optimistic air, the instruments creating a warm glow that wrap around the lyrics.

86 TVs is just acoustic guitar, cello and vocals and has a real edge to it, the two instruments fighting for space again one minute replicating the emotional struggles and questioning of the lyrics and then working in unison the next. Bullets starts with an aggressive acoustic intro that has us wondering which song John is going to drop into, whilst Storm Warning John tells us is being played "for one last time" as it brings bad things with it and you would never have known that they hadn't played it for a long time. There's a sense of helpless romanticism to The Moon Is A Blind Eye and From Your Favourite Sky that cuts through the expectant air whilst To The Brink has the crowd singing the harmonica section of the recorded version, slowed down and drunkenly out-of-tune or "artistically correct" as John describes it.

Someone Like You, from the I Am Kloot Play Moolah Rouge, also makes a welcome return to the set, prompting John to suggest he and Harriet do a duet on it, and although that doesn't happen, the interplay of the two personalities in the song still shine through as John smiles and chuckles his way through one of the standout tracks from I Am Kloot's most underrated album. It's followed by a gorgeous version of Ferris Wheels from the same album, stripped and slow right down to a tight taut acoustic strum with the cello dancing in the background. The crowd sit in silence and drink it in.

The show draws to a close with Northern Skies, although John sings the opening lines to Suspicious Minds before stopping laughing. There's a stage invasion, two men invited up by John to be the heavenly choir or Shaun Ryder and Bez, sounding more like the latter and causing John to ask them to just sing the chorus although it falls on drunken deaf ears. The crowd's attention span has now changed into raucous singalong for the set-closing Proof.  An encore is demanded and John, Harriet and Dave deliver a warm version of Time's Arrow, John's first solo single from his Leave Alone The Empty Spaces solo debut to cap off a night to a standing ovation.

Near the end of the set John suggests that they shouldn't rehearse and play more shows like this and we'd tend to agree with that statement. There's something magical about a gig where you can sense the spontaneity and one-off nature of what you're experiencing and that the artist is living from second to second during the show. In those moments music acts as a means of bringing people together, making them feel like they're not alone and where the words of the songs act as a healer or a reassurance. All of this makes the night feel like a unique experience, and the imperfections make the show feel more perfect.

John played Mouth On Me, Bigger Wheels, Fingerprints, I Believe, At The Sea, Sky Full Of Thunder And Lightning, Who Is Anybody Anyway, Leave No Traces, Days Go By, 86 TVs, Bullets, Storm Warning, The Moon Is A Blind Eye, To The Brink, From Your Favourite Sky, No Fear Of Falling, Someone Like You, Ferris Wheels, Northern Skies, Proof and Time's Arrow.