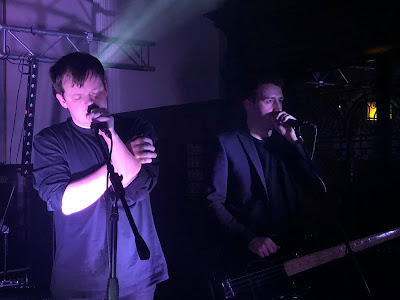 There's a wave building behind Ist Ist right now. High-profile support slots and international festival invitations at the end of 2019 have flowed into the announcement of their debut album Architecture earlier this week and tonight they've filled out Salford Sacred Trinity with just 48 hours notice and effectively by the word of mouth of their social media. Revealing songs from Architecture mixed in with old favourites, it felt like a moment, the point you know a band is about to go up a level in all respects and get the success they deserve.

The evening starts with a strange silence, no music playing, the lights down and no one quite sure what is happening. Then the opening bars of Wolves, Architecture's opening track and the first song to be revealed from it, blast out from the speakers as the band make their way on to the stage. Wolves is tight, claustrophobic and you sense that Adam is living out every word of these songs as he's delivering them, hand clasped tightly around the microphone, pursed close to his lips as he starts to reveal the darkness in the lyrics he's singing.  You're Mine follows, another track from Architecture, and again testament to how much more confident the band sound and how powerful they've become having been allowed to find themselves out of the spotlight, develop what they want to sound like and produce material now that feels like it's been created by a stadium-filling band you've somehow never heard of just yet, but which just became your favourite new band.

There's a tightness and cohesion to the sound, assisted by the impressive rig that had been custom-built in the church for the show, yet there's always the emotional turmoil in Adam's voice and his delivery that keeps the crowd on edge. It's a thrilling tightrope to balance on as Jennifer's Lips sticks its chest out and makes itself bigger to contend with the new kids on the block that are there to usurp it on the setlist and in the affections of the Ist Ist fan base. It's something noticeable later in the set with Night's Arm and Emily too, songs that have withstood the onset of dozens of new songs and evolved into something more powerful yet retaining the adrenaline rush of the early versions of the songs when Ist Ist were a different proposition altogether. 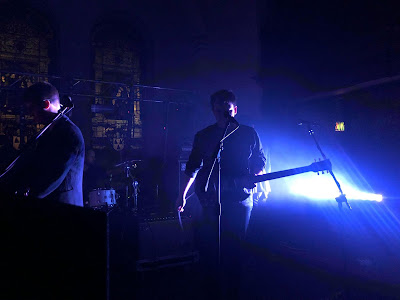 Discipline, another new song, sees Andy, Mat and Joel adding backing vocals as a sort of echo effect on Adam's. It's an angry song, focused around bringing an errant subject under control, the "what you need is some discipline" feeling more and more like and angry unspecified threat until Adam finally snaps and the song stops dead. It's a challenge to which Son Is The Father rises, again the intensity of the music providing the perfect backdrop for the similar impact the lyrics and vocals have on us.

Ist Ist are these days far more than just a bludgeoning brute force machine as they were in their early days and two new songs from Architecture demonstrate this beyond doubt. Under Your Skin is tense, taut, repetitive and sets the nerves on edge wondering when it's going to take you. Adam ditches the guitar for a shaker which he holds threateningly close to the microphone as he delivers his surmon. Drowning In The Shallow End is equally unsettling yet it's this which gives it the power and shows that Architecture is going to be a multi-faceted construction that will lift you off your feet, batter you around the head and then tend to your bruises all in one forty-minute white-knuckle ride.

The final new song and last song of the main set is Black. It's the most radio-friendly track they've produced so far even though they've refused to play the verse-chorus-verse-chorus-break-chorus game that seems to be the norm these days. There's romanticism in the verse but the repetitive line at the end comes to the sombre conclusion "what's left is only black, black." The response at the end tells its own story. 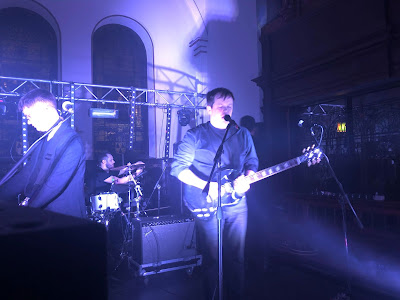 The encore starts with Preacher's Warning, a song on which Mat has created new layers of new electronic trickery to add to the song's foreboding nature that feels perfect for this church setting. I'm Not Here and Exist are three minute headrushes with a mix of control and the threat of breakdown creating the tension. Andy comes to the front to start Silence with his unmistakable bassline and it's the only point those Joy Division comparisons that still swirl around like a bad smell shouldn't be dismissed with a contemptuous snarl.

It feels like Ist Ist's moment is about to come. They've built an audience off their own backs around the country and further afield, playing gigs with local supports who bring no one, doing the promotion themselves and succeeding through the power of word-of-mouth. It's afforded them the time to craft their own identity and sound and purpose and to record an album that they wanted to make rather than what they thought they should make and it shows self-evidently in their live shows. It's there where they are at their most powerful, where they make their deepest connections and most lasting impressions and with their biggest shows to date on the horizon they're going to get even more difficult to ignore.

They played Wolves, You're Mine, Jennifer's Lips, Discipline, Son Is The Father, Night's Arm, Emily, Under Your Skin, Drowing In The Shallow End, Undignified, Black, Preacher's Warning, I'm Not Here, Exist and Silence.