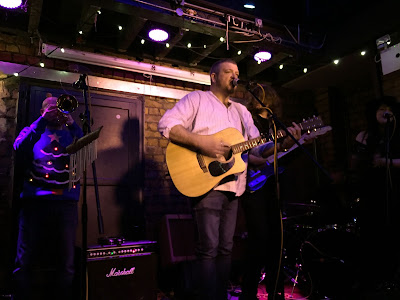 The Eagle Inn, sister venue to The Castle and Gullivers in The Northern Quarter, is a beautiful venue. Well to be precise, it's a converted tenement building next door. It's a fantastic space for intimate gigs and a great way for Last Race Home to celebrate with a Christmas party.

The band - Rob (bass), Brad (guitar), and Jim (drums) - take to the stage and begin jamming, creating an infectious mix of rock and and blues, coupled with Stephen's infectious brass before vocalists Donna and Denis join them for first song proper, Masochistic Blues. From the outset, it is clear the band have a great chemistry and intuition.

Debut single How Close follows, starting slowly and delicately, with Denis leading on his acoustic guitar. How Close builds and builds, ending with impassioned vocals and more great brash flourishes. Before Whiskey and Roses, Denis tells us that they were warned off doing a Christmas gig but the band are absolutely nailing it. Denis shares stories between songs and he's a great frontman. There are similarities with John Bramwell, and musically, comparisons can be drawn with I Am Kloot, given that they create these beautiful, organic, timeless songs. Last Race Home even have their own drinking song too! - the fun Hasta Que Moramos.

Songs like Psycho Killer and Last Night On Earth are great rock n roll tunes and Let It Be Known reminds me of John Lennon penned Beatles classic Don't Let Me Down.

On a first listen, Last Race Home are mightily impressive but they are not done yet. They go on to deliver an incredibly emotive and uplifting rendition of The Pogue's Fairytale of New York to end the set. Filled again with magical brass touches from Stephen, vocalists Donna and Denis do a sterling job recreating the vocals of Kirsty MacColl and Shane MacGowan. The band end with another cover, The Creedence Clearwater Revival standard Proud Mary. The band make it their own though and it's a rousing way to wrap up their Christmas party.  We look forward to seeing more of Last Race Home in 2020.