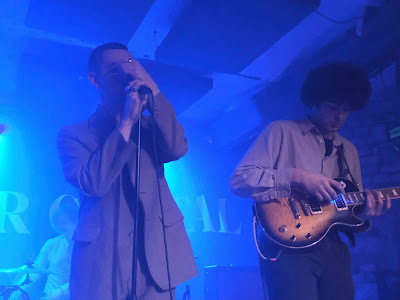 The Murder Capital's European tour headed into Prague on Sunday night for a sold-out show at the Underdogs venue supported by Junior Brother. An initially hesitant Prague crowd were won over by the sheer intensity of the band's performance despite a few technical problems.

Underdogs is an impressive venue. It's reminiscent of Manchester's Soup Kitchen in that it's a dark basement venue with basic facilities that give it a real feeling of warmth and that it's the sort of place where game-changing shows can take place. Its high roof means that any chatter from the bar (around a pound a pint) doesn't carry forwards as noticeably as other places. It's a real hidden gem out in one of the quieter bits of the city.

Junior Brother is opening up on this tour having secured funding from an Irish arts organisation. We missed most of his set in Munich due to the wrong start time being printed on the tickets so this was our first time seeing him in full. We're immediately struck by how accomplished a guitar player he is, making complicated intricate songs look effortless to play. 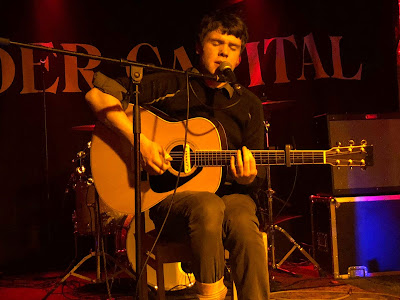 Although he's been releasing music for eight years and was nominated for RTE's Choice Music awards (sort of an Irish version of the Mercury Prize) with last year's Pull The Right Rope, three of the six songs he plays are new. The highlights are No Country For A Young Man, an angry rip at the state of his home country ahead of forthcoming elections, and an early single Hungover At Mass, but each of the songs feel like they're telling a detailed story in their own right, structured around the magic his fingers are creating and the beat of the tambourine he's playing with his foot. Some might baulk at his heavily-accented vocal but for us it adds gravitas and depth to these songs.

As the final strains of Burnt Out's Dear James die down and a crew member comes on stage and sets the amps and pedals squealing, the band make their way through the crowd without James at first and strike up the opening bars of Green And Blue. There's a roar as James saunters on to stage in that cool as fuck way he does, but things almost go awry as the first few words he tries to sing are done so without the mic working. It's quickly rectified though, although whether related to that or the fact the smoke machine means James can't see us and how we're connecting with them, it does feel there's a restlessness tonight in the front man, wandering off to the side when his band mates take over and standing right at the back corner of the stage watching as they play Slowdance II half-way through the set. Cathal has numerous guitar issues throughout as well, but they do what all great bands do and play around them giving us sparser moments without losing the intensity or power of the songs.

Don't Cling To Life sets the front rows off, its insistence at lifting you off your feet and sucking you into the emotion of the song, urging us to live for that moment because you never know what's round the corner. Love Love Love feels almost claustrophobic tonight, the way it builds and wraps itself around you. James kneels down and sings part of the song to one of the crowd.

Slow Dance I starts off with an elongated intro, improvised as they try to get Cathal's guitar sorted.  In this and its sequential follow-on, The Murder Capital really demonstrate their control of the emotions of a song, how they know to touch the very ends of the nerves that are the most sensitive yet it's done in a manner that is supportive and on your side. They're in the dark moments with you offering a crutch for you to lean on and you see it in the expressions of those singing every word around us. 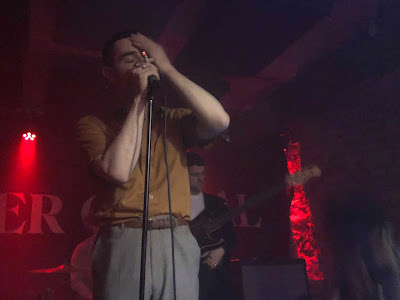 On Twisted Ground is the centre point of most Murder Capital shows, the moment where everyone shuts up and listens and pays this most raw of songs the respect it so deserves. As it grows out of Gabriel's bass, slowly ratcheting up in intensity, it feels like James, who has his arms round Gabriel's shoulders at one point is baring everything to us. He prefaces the song by telling us it's about how we all need to stick together with those we love in a world that's not a good place and it captures perfectly the importance of telling the people that matter to you that you love them.

Once the applause dies down they strike up the intro to For Everything which seems to build for an eternity, a fireball waiting to explode and when it does Gabriel, Cathal and Damien throw themselves around the stage, somehow not taking each other out whilst James implores the audience to join them in releasing every little inhibition that might be holding us back despite it being a Sunday night. The crowd respond as one, the front rows a heaving mass of bodies.

"MORE. MORE. I WANT MORE" James yells at us as they launch into More Is Less and James and Cathal join us, clearing a circle, sitting down and asking us to do the same before jumping to their feet and losing themselves in the melee that ensues. It's a physical embodiment of breaking down the barriers between audience and band, but in reality they'd already done that way before this moment.

Feeling Fades brings the night to an end and as with For Everything, the intro becomes a pressure cooker waiting to go off, a sign to lose any remaining inhibitions and immerse ourselves for one last exhilarating time. James launches himself on top of us, carried aloft on arms as he sings the "la la la la la la" refrain. As the song crashes to its end it feels like nothing has been left on the stage as they depart, souls have been bared, every emotion revealed and shared and the message of love well and truly spread.

Just three nights into the tour you can sense the band aren't content, as they've never been, to simply turn up and play the gig and go. There's an all-or-nothing approach to them, they tweak and twist songs to give them new life, refreshing themselves in the process.