TRACK OF THE DAY : Badly Drawn Boy - Is This A Dream? 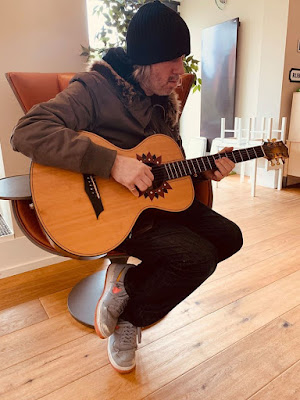 Is This A Dream? is Badly Drawn Boy's first new material since 2012's Being Flynn soundtrack album. With his immediately recognisable voice and ability to craft lyrics drenched in equal parts in romance and world-weariness, Is This A Dream? has a streak of optimism and hope running through it if those you love stick together.

The lyrics hint at better times that have departed - "I’m running out of caviar, had to sell the super car" - and the state of the world as it stands - "What’s going on in this world will only get you down" which is delivered with what are simple words, but which he turns into something that hits the nail on the head emotionally.  The hope comes in the chorus, that love is the cure as he asks "give me some love, your heart starts beating to the sound of your dreams, I need some love, and a hot air balloon, so we can make our escape."  With a sold-out show in the round last Saturday at London's Roundhouse, it's hoped that there's much more to come from him after such a long time away.