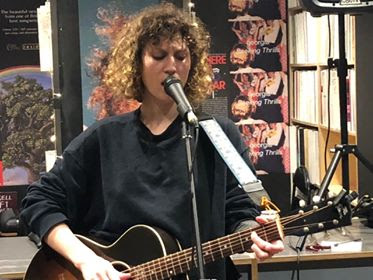 To celebrate release day of her debut album I Was Born Swimming, Squirrel Flower, aka Ella Williams, played an intimate in-store show at Brighton's Resident Records. We called by to catch a stripped-down show.

It's an intimate set-up for the show, an un-amped guitar and a microphone that Ella tells us is an unaccustomed way to play the songs that sound bigger and more fully-formed on the album. The surroundings strip away the layers of the songs though to reveal their simple beauty. Taking tracks primarily from I Was Born Swimming and adding one new song Desert Wildflowers as well as her cover of Tom Waits' Hold On that appears on the Dinked version of the album, exclusive to selected independent stores such as Resident.

She's on good form too considering she's just arrived five minutes before the 6.30 start due to train travels across Europe, during which she recalls a fight between businessmen queue jumping at St Pancras's Eurostar terminal and she tells us she's slightly freaked out by the huge picture of her that's on the wall behind her - and the crowd warm to her and, save for the passers-by in the narrow street outside, there's absolute silence while she plays these delicate fragile versions of her songs and a wait at the end of each song before we burst into applause in case they're not quite finished. 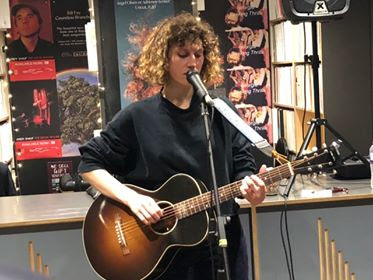 What the silence does is accentuate the beauty in her voice; there's no histrionics or effects on it just a warmth that adds gravitas and soul to the words she's singing which are borne out of personal experience. Descriptive lines about wooded valleys, birds with wings tied down and desert wildflowers feel more evocative with such minimal backing.

When she's not singing the guitar is so quiet that if you breathe you think it might break the moment, yet it's absolutely spine-tingling to witness and gives a different perspective on songs we'd heard fully-formed for the first time on the train down the same morning. Whilst the album explores many different styles, described here in Balloon Machine's Album Of The Week review, this was an all-together unique experience of these songs, but one that's no less rewarding.