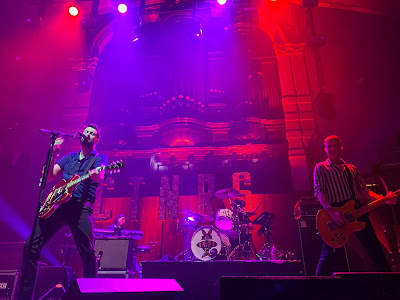 Courteeners completed a run of four intimate album launch shows for More. Again. Forever. on Sunday night in the intimate surroundings of Manchester's Albert Hall with a thirteen set song of fan favourites from across their career and a healthy selection of songs from their recent number two album.

More. Again. Forever. was a record a long time in coming. Rumours have it that a whole album was scrapped because it didn't meet the standard they'd set themselves. The album shot to number two on release, their most successful chart position to date and a reflection on one of, if not the strongest records of their career so far. Whilst they'll always have the potential albatross of crowds wanting to hear St Jude and nothing else hanging around them, the band have moved on, the lyrical themes of the likes of Better Man, Hanging Off Your Cloud, Previous Parties and Heart Attack might come from the same man, but they're coupled with the wisdom of living rather than the post-teenage angst that fuelled their debut. But we're in Manchester, the city that has fuelled their success, and the crowd know every word of every song, and are keen to help Liam out as he admits at the end, before one final What Took You So Long?, that he's shattered by the four shows in two days they've just had to perform. 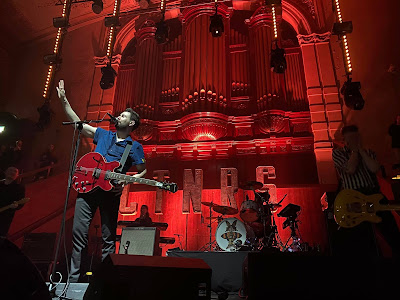 They start with Heart Attack and Heavy Jacket from the new record and you sense that they're enjoying the ability to see their audience feet away from them rather than yards away in a field - and the crowd respond in kind, bouncing around the Albert Hall on one of the nights where it feels like the most special place in town to witness live music. Are You In Love With A Notion and Acrylic, which is teased with a long intro, have Liam drowned out by two thousand people singing back every word. It's moments like this where you realise that, despite the prejudice of their distractors, their cultural impact around these parts is one of the strongest of anyone in the past dozen years, whether it be the bands that sound like poor imitations of them, the endless covers of their songs that aspiring bands trot out to fill out their sets, the deafening roars of "Liam, Liam" after each song and the refrain of What Took You So Long? appears far beyond the doors of their own shows. 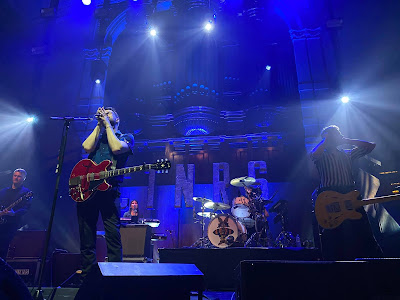 Better Man slows things down a little, but you sense the honest self-appraisal that went into the song even more keenly in the flesh than on record, whilst Liam's instruction for the place to "bounce" for Previous Parties is met with a mosh pit that starts at the barrier and ends at those crammed into the back corners of the room. Modern Love and Small Bones are fan favourites that make the setlist selection perfect for this truncated set, a real career-spanning mix but the songs that are guaranteed to keep the crowd buzzing before they finish the first half of the show with One Day A Time

The encore starts with a full band version of Hanging Off Your Cloud as they return with the song's luscious strings playing as they enter. The chorus is tailor-made for crowds to take and make their own and it's exactly what happens and there's a massive grin on his face as Liam surveys his disciples, young and old. It's followed by The 17th, a song where you can draw the lines from to More. Again. Forever. 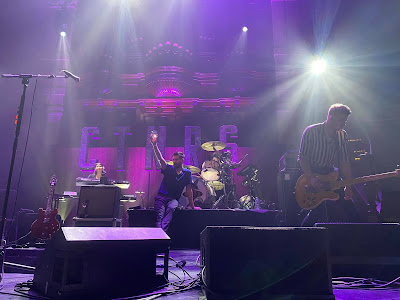 There's two songs left. Everyone knows what is coming and the place erupts as the rumbling intro to Not Nineteen Forever starts up. Flares are let off, creating a hazy fog, voices are raised yet further as bodies become one heaving mass. What Took You So Long? has closed sets for as long as anyone cares to remember, complete with the snippet of James' Tomorrow, does the honours again tonight, the crowd taking over at the end with the refrain. The five of them stand soaking in the adulation.

Before they go though, there's one last thing. Liam tells us it's their drum tech Harry's thirtieth birthday and he gets the crowd to sing Happy Birthday to him while hugging him. It's a sign of a band that hasn't lost touch with the people who put them where they are, evidenced further by Liam making time to meet fans after the show when the rock and roll handbook suggests that's something you stop when you get to a certain level. It's why their fans adore them because they still feel the connection, and it's something those that sneer at them are too cool to understand.