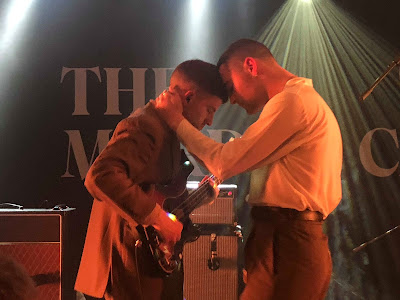 The Murder Capital opened their sold-out UK tour with their biggest headline show to date here at Leeds Irish Centre on Thursday night supported by Egyptian Blue and Unorthodox Coolock. A sold-out crowd were enthralled for forty-five minutes by tracks taken from their When I Have Fears album and an exhilarating performance from the Irish five-piece.

Unorthodox Coolock opens up the night with a spoken word set to what he tells us is the biggest audience he’s ever played to. His stories set to verse are personal - about Coolock where he’s from, growing up and childhood memories good and bad, his first girlfriend and first heartbreak and learning the importance of opening up and talking. It’s very much in line with the message of the headliner and it’s impossible not to be charmed by his dry wit and humour - “I’m Irish, in case you hadn’t noticed in his broad brogue. It’s rare for a street poet to hold the attention of an expectant gig crowd for so long but he does it effortlessly. 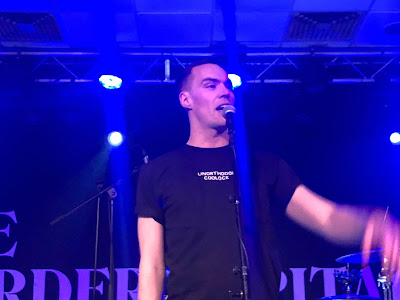 It’s a joy to have Egyptian Blue on the tour. Firstly they’re brilliant, their angular intense songs get the crowd going and secondly they’re being championed by The Murder Capital and are on tour because of the love and respect between them rather than a label-funded sell on to the line up.

Half their set comes from their only release to date, last year’s Collateral Damage EP, and it’s clear from the reaction around us to To Be Felt and their final two songs Collateral and Contain It that people have done their research. A moshpit ensues as the guitars and dual vocals collide with forceful impact. They don’t say much and let their music doing their talking for them - their second song Four really standing out for us, a progression and evolution of their sound. They get a well deserved response to their set. 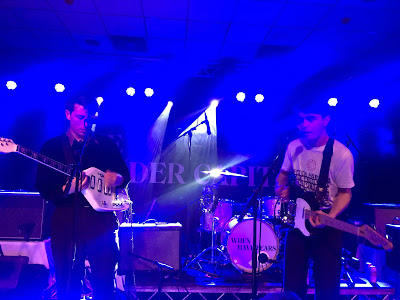 The anticipation builds as the crowd pack themselves tightly into the Irish Centre, an appropriate venue for them to open the tour and a great gig space except for some slightly over-enthusiastic security. As the final strains of Burnt Out’s Dear James fade and the tech sets the pedals onto feedback mode, the band make their way on stage to a huge roar of their biggest UK headline crowd so far. Gabe waves his bass around like an axe, Damien kneels and twiddles his pedal board and James strolls on stage like the coolest motherfucker in town at the precise moment that he needs to start More Is Less.

In a flash he’s in the crowd amongst us, forming a circle around him as he launches into the simple yet imperative command to “give me more” and hell breaks loose around him as he winds his way back to the stage. It’s followed by a magical Green And Blue, the song’s loose structure allowing the band space to breathe and Diarmuid to dictate back on the drums. As Cathal uses his pedals to create sonic effects over him, both band and crowd are lost in the music. 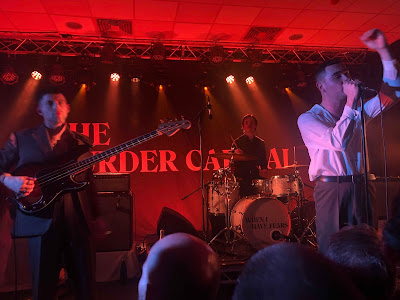 Slow Dance is held together, in both parts but particularly the instrumental second half, by taut tension, the sound of a band musically joined by invisible bonds. It’s so powerful you think it could be structured and rehearsed if you see them once, but our experience of their shows tells us that it’s the genuine connection and intuition between them that makes this so powerful. James departs then returns, prowling the stage, addressing his band mates  in the unspoken language of love.

On Twisted Ground is prefaced by reminding us to talk to each other and once the irritating “Leeds Leeds” chants are silenced by the crowd around the perpetrators, the song is impeccably observed as a silence falls over the crowd and people close their eyes and remember lost ones or remind themselves how music and friendship has saved them from the fate of James’ best friend. It ends with James breathing heavily into the microphone as Gabe’s bass lines hang in the air like the unspoken sadness and sense of horrible loss. 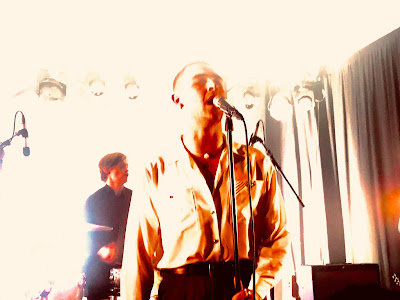 Things are stoked back up by the powerful intensity of Love Love Love, the stage bathed blood red as James kneels down to sing to a woman in the front row as the song’s breakdown brings temporary respite. The insistent opening of For Everything has the crowd throwing themselves around, hollering back the dark lyrics like a spell of protection. James stares ahead, tambourine banging against his chest like a man possessed, but like the rest of us he’s just lost and lifted up by his four friends.

"Let’s have a dance" he demands as the two and a half minute headrush of Don’t Cling To Life exhorts us to live for the moment as there might not be more to come. It’s a most powerful message and one that resonates with a crowd that’s succumbed to their brutal yet beautiful charm. They finish with Feeling Fades with everyone sitting down for the first verse on James’ command until he beckons us to lose ourselves one last time and joins the crowdsurfers above our heads. 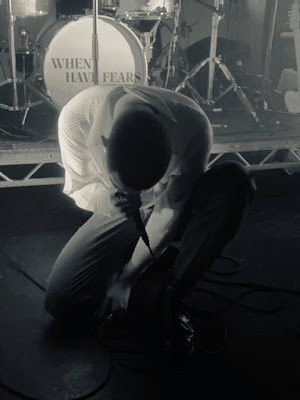 It’s short and sharp, new songs are something for another day, but the overwhelming feeling is of love and connection. What’s so empowering looking round the crowd is the age range, from kids wearing pink bandanas to those refusing to accept middle age, groups of women amongst the men and everyone looking out for each other, even the crowdsurfers. That in itself embodies the love that underpins everything The Murder Capital are about in a time where to hate feels like a default position for so many. It is why they are the most important band in the world right now. And that is the answer to the question James himself posed "what’s the fucking craic?"