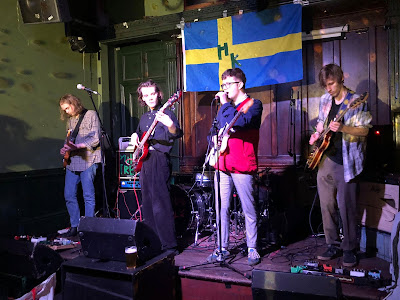 Yuka Tree are one of a number of highly-tipped bands around Manchester at present, having recently released their debut single The Preacher and having sold-out their first headline show at the Eagle Inn. On Sunday night they opened for Harpans Kraft in the intimate surroundings of The Castle Hotel.

The opening slot on a four-band bill on a Sunday night can be a bit like the dead man's shoes slot, but there's a healthy crowd in by the time Yuka Tree take to the stage at seven thirty, curious to see, like us, whether Yuka Tree live up to their press.  They start with a three guitar approach that's very much making the statement about what they're going to sound like, and they certainly can play them, their songs have strong riffs that grab your attention immediately and hold it, whilst Kieran's voice recalls Mancunian vocalists of the past, but with a delivery that feels very much his own.

The set features seven songs, all originals, and shows a variety in pace and tone that's often missing with a band so early in their life. They don't announce titles nor do they have a setlist, but songs we guess at being called Loser and Not In Love stand out in particular as does a two-minute track that sees Kieran come down into the crowd. They also have the ability to craft longer songs that never outstay their welcome as they possess more melodic tendencies when Kieran puts down his guitar and the two-pronged approach gives the songs more room to breathe.

The Preacher is the penultimate track of the set and it shows that the recorded version's live feel is very much something they can replicate on stage. They're still a band in their infancy so they're still learning their craft, which is evident in the way there's little connection between them and the audience other than the draw of their music, but that's something they'll develop in time to build on these very promising beginnings.