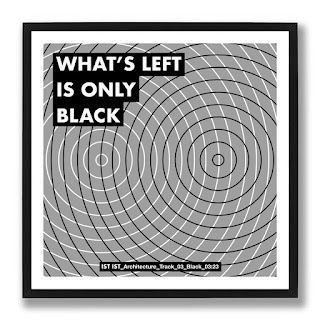 Black is the third track to be taken from Ist Ist's forthcoming debut album Architecture, accompanied by an unsettling video that sees a woman haunted by the ghosts of her past.

Black is already a live favourite with Ist Ist's fanbase having been part of their live set for the past year. The song has a sense of dark unachievable romance - "I can't make the clouds clear for you, there's nothing that I'd rather do, I can't make the seasons change for you, there's nothing I'd rather do"- that leads into the resigned chorus that comes late in the song - "what's left is only black, black, black." The music is contrast is upbeat, strident and confident, a hook line in the verses of the sort you'll find yourself humming to and it concludes with an instrumental section where Joel Kay's drums come to the fore.