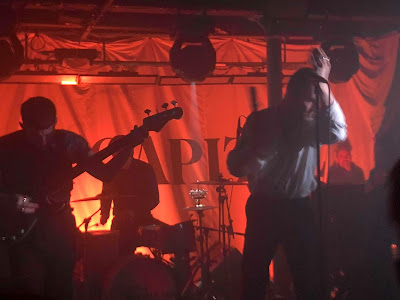 The Murder Capital completed their biggest UK tour to date with a packed-out show at Liverpool's O2 Academy 2. Keeping everything fresh by changing round the setlist from previous nights on the tour, they left another audience stunned by the ferocious intensity of their forty-minute live set.

As the last refrain of Burnt Out’s Dear James dies down and a wall of feedback erupts from the amps the roar in the up to now sedate Academy 2 is deafening. Gabe throws his bass around, only the strap preventing him decapitating the wrong row, the more studious Damien and Cathal setting their pedals whilst Diarmuid’s rhythmic punishing drum beat sets the pace as James saunters on to the stage, cool as fuck at the last minute, and launches into Green And Blue. Rather than sounding tighter, it feels looser yet there’s never question of them losing control of the song. It takes a special band with a powerful bond to be able to do that.

More Is Less is accompanied by a surge forward from the back, the front rows being pressed against the barrier as the cyclonic rhythm from Cathal’s guitar propels the song. A circle pit opens up at James’ request as arms fly (don’t come in a moshpit with a coat folded across your arm and elbows protuding as a result, lads) and he takes a look down and wisely stays on the barrier as an observer barking the lyrics as the chaos that ensues beneath him.

The stage is bathed in poignant bloody red as James declares Love, Love, Love with a sense of desperation. The song’s lifted out of the dark pits of the lyrical content by the music which tries to rebind the twisted broken strands of the band’s heart.  Slow Dance feels like they mean it even more tonight, they’re tired but they know they can leave everything behind on stage as they head home for their prodigal son welcome at Vicar Street in Dublin on Thursday in front of 2,000 hometown devotees. The song allows them to forge its path for it, to dance around the basic structure and follow where one of them leads the rest. As it breaks down into the second part James sits down on the monitor and stares back across his band mates, as in awe at them as we are.

Before On Twisted Ground James talks about the response they’ve had on this tour, the sense of community that’s been forged and the sea of new and old faces in front of them every night. It feels poignant that this prefaces a song about suicide as music is one of the greatest antidotes to the separation and utter helplessness than can drive people there. It’s punctuated in points by whoops from the crowd that feel inappropriate to the moment but which come from someone else’s heart but thankfully little audible chatter. As it reaches its final refrain Cathal coaxes what sounds like church bells out of his pedals before they distort and the song stops dead. 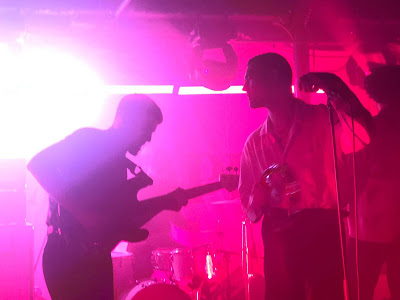 There appears to be technical difficulties with Damien’s amp at the start of For Everything so the song’s build is initially replaced by a swirling feedback as James prowls the stage, then smashes hell out of his tambourine on his wrist until the powder keg is released and the crowd reverts to a seething mass at the front. It finishes, James feet from the mic, mouthing “for everything, for nothing” in sync with the bellowing voices from the pit.

The whole place feels invigorated and Don’t Cling To Life feels like it’s going to lift the lid off the place. Another circle pit forms but it feels like too predictable a crowd response to a song about celebrating life, living in the moment rather than just holding on. Where earlier Unorthodox Coolock spoke of books saving lives and living for the moment rather than dwelling on the past, it makes you feel like these young men have discovered the hardest way the secret of making the most of what we have in life and want to be the catalyst to ensure that they don't remake the same mistakes and others make them as well.

We’re asked to sit by James, told we’re obedient to the command of his hand when Feeling Fades moves from verse to chorus and one last bout of mayhem ensues. He ends up surfing over us, held up by a sea of hands as Cathal stands by the speaker stack and Gabe and Damien at the front of the stage. He’s still there as the song finishes and once back on stage, he jumps back down to shake hands, kiss foreheads and dispense winks to those out of reach. There’s a few shouts for one more song, but right now with the band on a roll like this, able to twist and turn what they have each night to keep themselves fresh, more would very definitely be less.