The Murder Capital's penultimate night of their UK tour called in at a sold out Birmingham O2 Institute 2 on a sedate Monday night with another exhilarating set that blew away the post-weekend cobwebs supported by Egyptian Blue and Unorthodox Coolock. 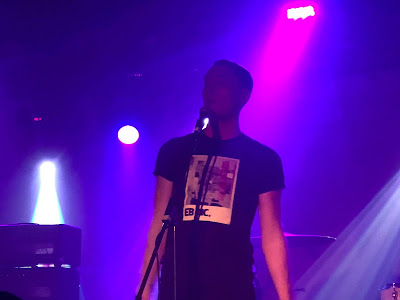 Orthodox Coolock opened up the night with his own unique brand of street poetry coming from the same streets that The Murder Capital tread back in Dublin. Like the headliners his art is a means of expression, of using communication with others to help him and them deal with demons, the thoughts that burn you up from the inside unless you extinguish them by talking about them openly and in a safe place. Like the other audiences on the tour, the Birmingham audience is respectful and listen, which is testament to the power and the aura of the man, a gentle giant, but one who you know you'd want on your side if things got tough. His words might relate to his youth on the scheme back home, but you could replace the place names, change his accent and most real working class kids could tell the same stories, albeit probably far less eloquently. 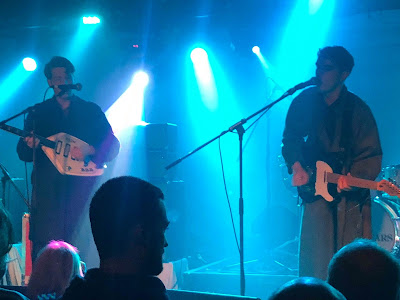 Whilst Egyptian Blue don't get the mosh pit they've had on previous nights (because it's a Monday and the beer in the venue is six quid a pint so the audience is significantly less inebriated and therefore more inhibited), their set is the best we've seen them so far. We say so far because they're a band we can see achieving so much more - and the way they attack their songs has a real hunger and passion that can't be faked. There's moments, such as at the end of opener Skin and Four Is The New Four where they're so lost in the song that the intense momentum they've built up can't suddenly stop abruptly. The interplay between Leith and Andy's vocals shifts from a dual onslaught as they scream "Deception! Deception!" at the end of new single Never to call and response as they deliver Collateral and Contain It to finish off their set and win over an initially reticent Birmingham crowd.

There's no such reticence as The Murder Capital appear to a wall of distortion and launch into More Is Less and James leaps into the crowd, forcing us out into a circle around him, eyeballing one fan who breaches the circle and then being enveloped as Cathal kicks the song back into life and James is lost in a melee of bodies where he stays until its conclusion rather than making his way back to stage, conscious of the fact that the Monday crowd might need some encouragement. The sea of arms clapping along as For Everything's powder keg intro inches closer to the spark that ignites it suggests that they don't need much.

Slow Dance is time for a breather for the body at least, if not the mind, as the dark lyrics feel even more bleak and desolate in the flesh than they do on record, James looking around at his band mates for one to approach and look for solace - and there's much in that which is reflected in the whole evening and the ethos of the band. James alludes to this at the start of On Twisted Ground, telling us, without asking our political persuasion, that he finds it ironic that they're being made so welcome here in a time of confusion and uncertainty. He references community as Gabe's mournful bass strikes up and in that captures the very real truth that music knows no borders, however much politicians might try and place them in its path. It's again respectfully observed, we notice a few people completely lost in the moment, James included, at the brief points we open our eyes. 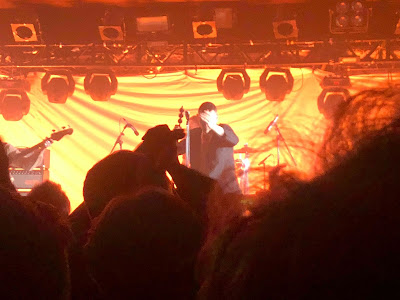 Green And Blue resets the pace of the set, its seven-minute wandering journey resuscitating the mosh pit of the first few rows, but also demonstrating the powerful musicianship of the band that allows them to generate such an intensive and emotionally draining experience. The Murder Capital's provocative assault on the senses comes from all directions. Love Love Love is the simplest yet most essential message, the painkiller to the incredible suffering that death of a loved one brings to those left in their wake, but one that can be a panacea to a million other punches that life can throw at you.

The crowd need no bidding to let loose and dance as James demands we do on Don't Cling To Life. It's the likes of this two minute something head rush and More Is Less that will draw so many to The Murder Capital from the radio and then snare them with no means of escape. Live it's even more thrilling and visceral and the crowd respond in kind. We're asked to join them in sitting for the final Feeling Fades where James dives in and is carried almost to the sound desk, handled with care above the shoulders of the heaving mass on a sea of arms, legs in the air, yelling the "la la la la" almost drowned out by the six hundred disciples underneath him.

There's a moment where James reflects on their last visit to Birmingham, which he gets wrong to his own amusement, and the fact that when they got the bookings on this tour they were aware of the size of the venues, but not what it would actually mean when those rooms were full of people. It's a sense of genuine humility that this band have - they make no proclamations about being the best band in the world, don't diss their peers but embrace them and they seem genuinely blown away by the response they get while they're on stage and also at the merch desk later on - that will serve them well as they continue their seemingly unstoppable trajectory