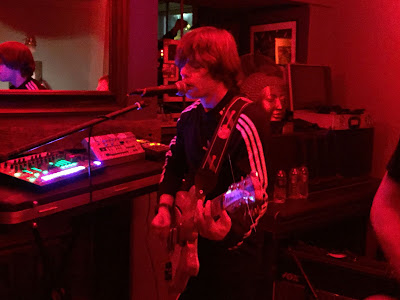 When the Carlisle four piece The Lucid Dream announced a special one off gig at Todmorden's legendary Golden Lion last autumn, all tickets were snapped up in just a few hours. Stuart Ralston was ecstatic to get a ticket. The band didn't disappoint, playing a psych-rock-acid-house-fused set, complete with new material from the eagerly awaited fifth album.

It might be a cliche, but some reviews write themselves. For many of the devoted The Lucid Dream fans in the house tonight will undoubtedly be their gig of the year. It's twelve months since the band last played a headline show - in support of their classic fourth album Actualisation - and six months since they supported New Order at their massive Blue Dot Festival show. The band, having completed the recording of their fifth album wanted to road test some of the new material. Judging by tonight's reactions, they are set for further success.

As soon as the band take to the stage to tremendous cheers from the crowd, the drum machines and sequencers kick in and an invigorating Alone In Fear comes hurtling at us. The opening track from Actualisation, it is power charged. Out front Mike Denton plays commanding bass lines, whilst Mark and Wayne create their magic with guitars and synths. Out the back, Luke keeps a frantic beat going. Clocking in at around the ten minute mark, it's a bold opening statement. It's hard to believe that the band haven't graced a stage for six months.

It might be a cold winter's night outside, but inside The Golden Lion, it's a sweatbox, as both band and audience generate an incredible energy. Although the band reside over a hundred miles away, tonight feels like a hometown show. Indeed, The Lucid Dream fan base is a loyal and devoted one, with many fans travelling from Carlisle and all over the country.  There's no one quite like The Lucid Dream when they are on this form. As Alone In Fear seemingly draws to a close, Mark's "drags you down" mantra is sung back at him by everyone in the audience and then the band crank it up another notch. They've given more in one song than many bands would do in a full set and there's an incredible ovation from the audience as Alone In Fear finishes. 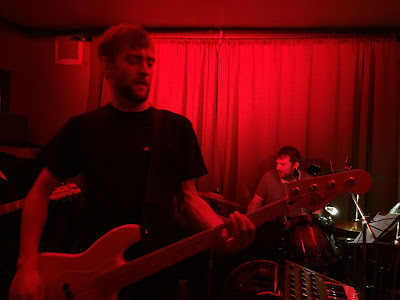 Bad Texan comes swaggering at us next. Mark's simple, repetitive vocals coupled with Wayne's guitar hooks create that classic psychedelic sound but with a twist - The Lucid Dream's rhythm section turn Bad Texan into something we can all dance to.

"We're going to play some new stuff now" announces Mark to a shout of "about time" before the band launch into the instrumental Coalescence. Opening with an infectious drumbeat and a hard baseline, it's slightly more rock orientated than recent material and peppered with some beautifully breezy reverb drenched guitar licks. On first listen, it sounds epic, getting yet another great reaction from the crowd.

SX 1000 sees the place go wild.  The acid house beats coupled with vintage synths and yet more massive bass lines is probably the favourite song in The Lucid Dream set right now. Another incredible audience response follows to with Mark Emerson replies "not bad for psych traitors, wait to you hear the next one!"  CHI-03 begins with some spaced out synths, and there's almost an undercurrent of New Order and Primal Scream to the sound. In addition, there's almost a jazz undercurrent as it sounds as though the band are improvising and jamming their way through.  CHI-03 slows the pace down and demonstrates that there's great versatility to the band. This is further emphasised by the laid back grooves on High and Wild, the third and final new tune showcased tonight. It's a fitting set closer, where the band create a big, beautiful, blissed out finale.

The crowd won't let them go though, and Mark ends by thanking everyone for coming, saying hopefully they'll have the new record out before long. A massive Epitaph clocking in at nearly fifteen minutes brings the show to a close and everyone ventures home happy.

There are lots of seasoned gig goers in the room tonight, many of whom are massive Lucid Dream fans. Tonight the band reminded us of their power and why they mean so much to so many people. It looks like we may already have a contender for album of the year. What a night. The new tunes went down well and the old ones sounded fantastic.

The Lucid Dream thrilled us with Alone In Fear, Bad Texan, Coalescence, SX1000, CHI-03, High And Wild and encored with Epitaph.