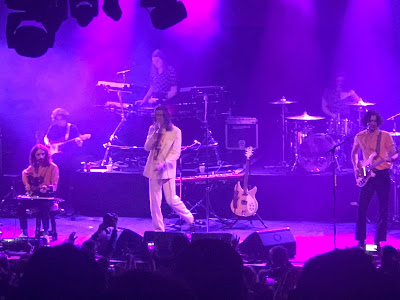 Blossoms' non-stop promo campaign for their third album Foolish Loving Spaces rolled into Manchester's Ritz for an intimate launch show that mixed tracks from the album with old favourites, revealing their expanded live set-up and delighting an audience of young and old fans alike.

Julia Bardo opens up proceedings and does a very good job of holding the attention of a boisterous crowd that's waiting to let loose when their heroes come on stage. With four members of her band to accompany her, the songs that have felt so warm and delicate on record - debut single Desire and its follow-up I Wanna Feel Love - are fleshed out to fill up every corner of The Ritz yet still allowing her voice to take centre-stage and be the star of the show. It's a confident performance in front of a restless crowd that will have hopefully have won her over some new followers. 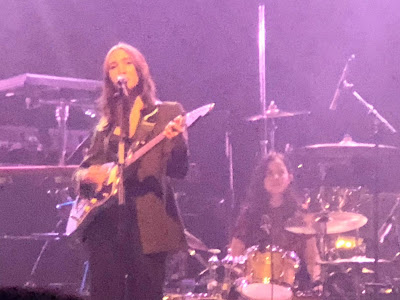 The anticipation for Blossoms though is off-the-scale by the time they've worked through The Human League and Abba on the intro tape and the crowd, many of whose parents might be too old to have been around first time round, sing along every word. It's a clue to what Blossoms have done so well, why they are the band that broke from the ranks with their debut and stayed way ahead of their contemporaries. They have a feel for what is timeless, what has appeal that goes beyond a certain demographic and are not ashamed but celebrate their record collections.

Foolish Loving Spaces looks like it might be heading for the number one spot, the band's second if they achieve it, and it's canny marketing like this that is helping to ensure that, but also that the fans are aware of the new record. The deal is a cheap gig ticket if you buy the album in effect - twenty pounds for the pair when tour tickets are more than that on their own.

They're also wise enough to know that they need to adjust their live show to the bigger stages they're now filling, their Manchester show at the end of March being at the Arena, double the size of their last one at Castlefield Bowl. To this end they've added two percussionists and an extra guitarist as well as bringing in four gospel singers for the new songs. It could quite easily have been overkill, the ambition drowning out the songs but like pretty much everything they've done since they first started to get attention in 2014, it turns to gold. It feels like a big show made for a big stage and every time we see them Tom appears even more confident and assured in the front man role than he did the time before.

Your Girlfriend kicks things off, the album's preview single setting the crowd bouncing and singing along in the way the best pop songs do, but there's few that have the lap steel guitar that Josh plays for this song. And this is where Blossoms are at their best, balancing effortlessly on the line between genres - the psychedelic early sound of Blow still has all those traits that drew people in, but now can be left to the audience to takeover in parts whilst Getaway could be something plucked straight out of The Beatles' most melodic moments and transformed into its twenty-first century equivalent.

The songs from Foolish Loving Spaces are bold, confident and euphoric in their execution, standing apart from the tracks from the first two albums, but still very much traceable by the band's DNA. The four backing gospel vocals of My Swimming Brain lift and twist the song whilst The Keeper is best described by Tom at the end as "a lot of fun" yet still lyrically captures the emotional turmoil and uncertainty of young people's relationships in a simple relatable way (which also applies to us older people as well). 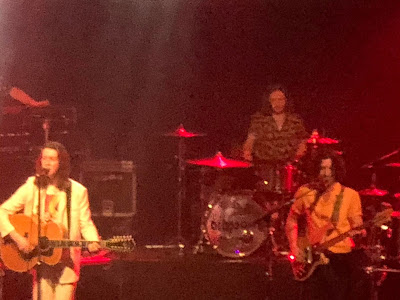 The mellowest moment of the night comes when Tom takes to the keyboards for Sunday Was A Friend Of Mine, before they let loose on the recent single If You Think This Is Real Life, a calypso-influenced song that burrows down like the deepest earworm and has you involuntarily dancing, and Oh No (I Think I'm In Love) which feels like another natural radio-friendly single drenched in the perfume of influences but sounding unmistakably Blossoms. That psychedelic edge comes back on the final new song they play, and the album's final track, Like Gravity, where the pop tones turn into something darker and instrumental and Tom sits himself down on Joe's drum riser to take it in himself.

In between all this there's plenty of space for old favourites to make the rest of the set like a mini Greatest Hits. There's A Reason Why (I Never Returned Your Call) and I Can't Stand It's urgent rushing flow sets the crowd off earlier in the set, whilst Blown Rose and Honey Sweet mid-set remind us of the wistful romanticism that often filters its way into Tom's lyrics.

They finish predictably (yet no one cares about that) with an acoustic My Favourite Room, which the audience sing as much of as Tom, that segues into snippets of You're Gorgeous and Half The World Away before the band return and At Most A Kiss's triumphant intro immediately changes the pace again. It ends with Tom up with Myles on the keyboards as they build a wall of noise that ends up breaking back down into the audience clapping and the inevitable finale of Charlemagne that saps whatever energy is remaining from the bouncing masses and is greeted by a couple of flares before the Ritz's dance floor gets some respite at the end of its sixty-five minute workout.

These are early days in the long campaign that'll accompany this album, but it feels like Blossoms have stepped their game up again, looked at what they can do to enhance their crowd's experience and make playing these songs fun. They've expanded yet this has opened up opportunities rather than blurred the pictures they're painting.

They played Your Girlfriend, There's A Reason Why (I Never Returned Your Calls), I Can't Stand It, Blow, Getaway, My Swimming Brain, The Keeper, Blown Rose, Honey Sweet, Sunday Was A Friend Of Mine, If You Think This Is Real Life, Oh No (I Think I'm In Love), Like Gravity, My Favourite Room, At Most A Kiss and Charlemagne.