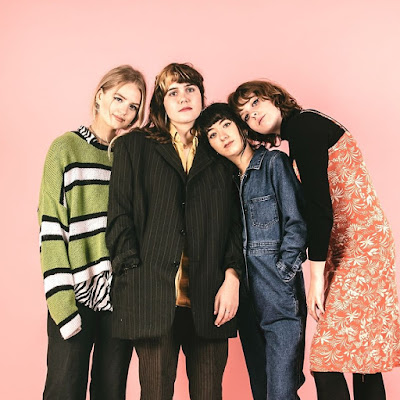 Surf and Turf is the debut single from Brighton-based four-piece Lime. Demanding we "get ready to get zesty" Surf And Turf is an impressive first outing from a band highly tipped by the likes of Loud Women to be a breakthrough act in 2020.

Lime are Chloe Howard (vocals / guitar), Leila Deeley (guitar), Tippi Morgan (bass) and Annabel Whittle (drums). Their sound is a modern take on post-punk, tongue-in-cheek references to eating cheese, but with a more threatening edge as Chloe the song's subject that "she loves it, when you squirm and fight, she wants to ruin the rest of your entire life" before the song heads off on a wall of guitars and the sort of solo you'd expect on a traditional rock release.

They play London Finsbury Pub (May 8).

Email ThisBlogThis!Share to TwitterShare to FacebookShare to Pinterest
Labels: Lime