TRACK OF THE DAY 3 : The Slow Readers Club.- Jericho 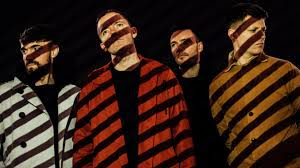 Jericho is the second single to be taken from The Slow Readers Club's forthcoming fourth album The Joy Of The Return out on March 20. Described by front man Aaron Starkie as "our sunniest offering yet" it's both a departure from their indie electro doom pop as well as an evolution of their sound without cutting the umbilical cord to the sound that has won them an intensely loyal fanbase over the past few years.


Aaron continues "Jericho’s hopefully a good indicator of the variety people can expect from the album. Plus it’s got a great hook in Kurt’s riff. Lyrically, I’d say it’s probably the track that most closely relates to The Joy Of The Return of the album’s title, as it’s written from the perspective of my teenage self.

“It’s a teenage romance song really, about that moment, on the threshold of a new relationship, where you begin to surrender yourself. As a band, it’s one of our favourites on the album, and came together quite easily from first jam through practice sessions. The chorus was the most challenging aspect as we really had to get the feel of that right.”

Jericho suggests that they're starting to lighten their dark brooding sounds and embrace more dance-influenced beats as also evidenced by the album's first single All I Hear. Lyrically though, it's still plagued with many of the doubts and insecurities that have connected with their fanbase - Aaron pondering "I fantasise, a vision taking hold, a girl I knew well... the words stuck in my throat... with all that I possess, I'm waiting for the call."