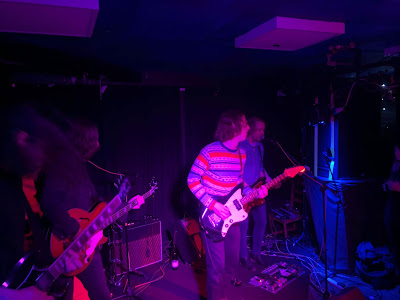 Boston's The Magic Shoppe's European tour called in at The Peer Hat in Manchester on Sunday night as part of the 56th edition and fifth birthday party for the Astral Elevator club night.  Support came from The Kundalini Genie and Little Strange.

Astral Elevator is part of the fabric of the Manchester underground music scene that often gets ignored when people talk about what's going on in the city, but it provides a vital outlet for European and American bands touring the UK to call into here and for local psyche-influenced bands to get valuable stage time in front of decent sized crowds of music fans who will get them. It's developed a community spirit that's lacking in other areas of the scene where bands help others, stick around to watch each other and interact with the audience. It's exactly what's at threat with the proposed restrictions of freedom of movement of artists and the burdensome cost of touring that will come if the rules are applied as they are being suggested.

Unfortunately we only catch the last song and a half of the openers Surfing Pointers, but enough for us to note that their dual female / male vocals and intense shoegaze-tinged sound will be worthy of further attention on another day. 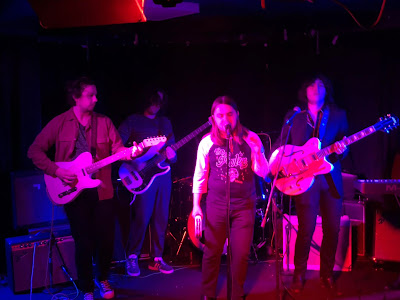 Next up is Little Strange, a six-piece that look like they belong in different bands but who have developed a decent local following with a number of singles including the recent Loving Only Gets You Down as well as Let Me Go, Cosmic Girl and Alright Now, all of which are present and correct in their set which explores the more groove-based side of the psyche spectrum, heavy on keyboards,  even with two guitarists in the band, and on one track mouth organ that goes down well with the front rows. 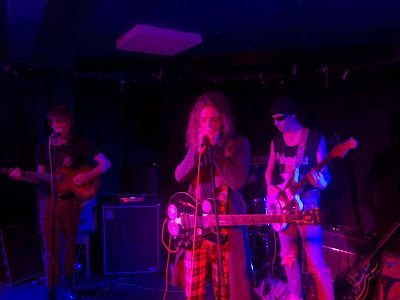 The Kundalini Genie are a bit pissed. This could normally spell trouble, but Robbie's so utterly charming and funny that they're forgiven by everyone in the room, although a joke about a macaroni car driving pasta his mum is a bit too cheesy for words. They break a guitar string in the first song, so he announces they're also called Technical Difficulties, which let's face it would be a great band name. It doesn't detract from their set - songs like Stupid Girl, which segues into a section of Tainted Love, and You Had It All, from their forthcoming fourth album, are rich, warm and possess genuine depth, while Right Now is harsher, rough-edged yet equally as powerful. Their cover of The Velvet Underground's Oh Sweet Nuthin' remains faithful to the original and they finish on a spaced out Spaced In - and despite them saying it's the worst gig they've ever played, the alcohol has clearly dimmed their senses because the crowd reaction tells a different story. 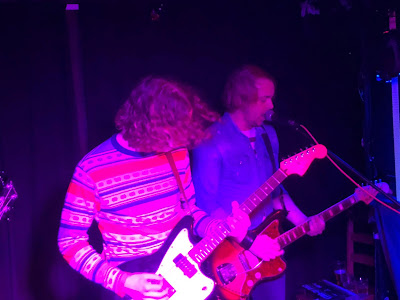 The Magic Shoppe's forty-five minute set could be mistaken for a jam session such is the way the songs flow effortlessly together, yet without ever sounding the same, taking the enthusiastic crowd on their journey with them as they lose themselves in their music. The names of songs feel irrelevant, the breaks between songs inconsequential as their set runs together like a fluid joined-up whole that has both theirs and their audience's pulses racing and feet tapping and it's no surprise that they've been invited back to Astral Elevator as their ethos and that of the promoter's are closely aligned.

Josiah's vocals often sit entwined within the song's huge hook lines yet this feels like a natural state that marries perfectly to the band's way of working. They have no setlist because they don't need one, they don't say much because the music does their bidding for them and the intuitive connection between the five of them makes this feel like an uplifting experience, even on a dark cold tired Sunday evening, for both those to whom they're familiar or those, like us, who are less so.