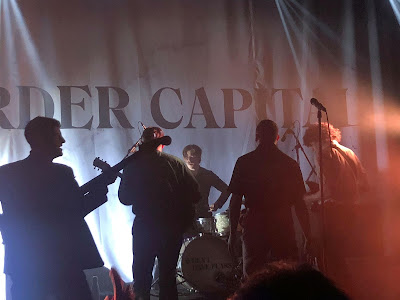 The second night of The Murder Capital’s tour rolled into a sold-out Manchester Academy 2 on Friday night. The soulless room was made to feel like the most intimate small venue by a band exponentially upping their game.

Unorthodox Coolock takes on the mantle of main support in the illness-enforced absence of Egyptian Blue and his spoken word stories of growing up in the roughest parts of Dublin in a family that fight like cats and dogs but ultimately adore each other touches a chord with the Manchester audience. Tales of nights out with departed friends in a working class pub where the stench of toilets fill the room, teenage rejection and living by the seat of your pants are told with an openness and clarity that makes you immediately warm to him. That he can hold the attention of a room this size doing something he tells us he was going to give up on until his friends in The Murder Capital invited him on tour is a real triumph. 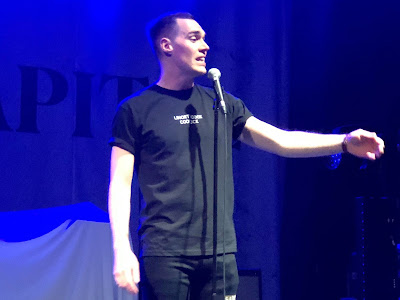 The sense of anticipation reaches fever pitch as the band make their delayed entrance to a wall of feedback. Immediately as they strike into More Is Less it’s evident that they’ve raised their game to match the stakes at play here. The test of a band is whether they can step up from intimate venues and move through to academies and ultimately arenas and tonight The Murder Capital blow away any lingering doubts. James jumps off the stage, onto and over the barrier and forms a circle which quickly closes, threatening to overwhelm him as he lets loose but there’s an unspoken bond of trust that sees him safely home to the stage.

Whilst there’s no new songs on the tour, rightly so given it’s only eight months since they finished recording When I Have Fears and the follow-up should not be rushed, they do switch the setlist around. It’s so the experience for everyone is different every night and any danger, not that there is with these guys, that it might become routine, is dispelled. We can hardly hear James sing the first verse of For Everything, once the punishing opening has the crowd bouncing. As it reaches the end James stops singing and takes in the audience screaming back “for everything for nothing.” It’s something he’s going to have to get used to. Slow Dance’s two part modern waltz might slow things down but it makes things feel even more intense. James hugs Damien, turns to look at Diarmuid as the five of them, as one band of brothers, lose themselves and us in their creation. 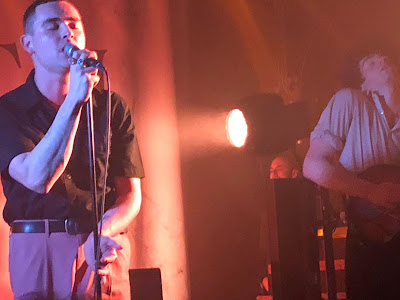 On Twisted Ground is prefaced by James talking about Valentine’s Day and how important it is to tell those you love that you love them. It feels even more poignant tonight and you can hear a pindrop as Gabe’s bass pierces the funereal atmosphere as the song slowly builds capturing the despair and helplessness of loss. A guy next to us who’s clearly been impacted by the loss about which they’re singing is comforted by first friends then strangers. No one feels alone when The Murder Capital are in town.

Academy 2 is often seen as one of the city’s most sterile venues but tonight it’s alive, buzzing with the excitement that only the very best, most powerful and incendiary live music can generate. Love Love Love is the answer to the question posed by On Twisted Ground, the only way to survive the darkest moments and to come to terms with it. Amongst the mass of seething bodies there’s a sense of the audience moving as one, joined by the bond the brothers create.

It’s underlined at the end of a wandering Green And Blue when Gabe, Cathal, Damien and James come together, face away from us towards Diarmuid on drums with the band’s name lit up on their simple backdrop. “Take it away Pump” James tells Cathal as the whirlwind intro to Don’t Cling To Life sends the crowd even wilder. It’s a two minute headrush with the message to let yourself live in the moment - “failing this, let’s dance and cry” - and that’s exactly what we do. 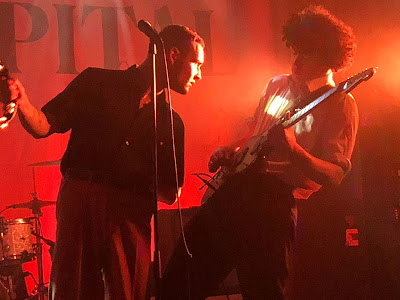 We’re told to “get the fuck down” except for one girl on her friend’s shoulders for the start of Feeling Fades. Some sit, some of us crouch, we’re told to get back down as the desperate need to throw ourselves around one last time gets too much but when we do it’s as one. James dives above us, wrapped in an Irish flag someone drapes around him, almost submerged in a sea of hands. And then they’re gone, no encore, no drawn out ending just a mass of exhilarated bodies left behind them. A band on the brink of creating their own legend.