TRACK OF THE DAY : Machine - Memories 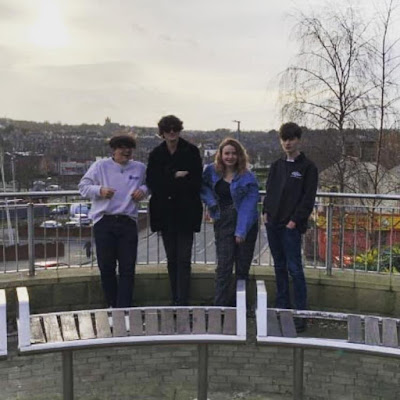 Machine are a four-piece from Barnsley who've recently released their debut single Memories. They only formed as recently as November 2019 so for Memories to be brimming with such raw potential only four months into their existence is some achievement.

We first heard Machine at Cafe Totem in Sheffield when they were soundchecking for a gig and we were passing on the way to the toilets. It's hardly the stuff of Alan McGee discovering Oasis legend, but we were immediately struck by Liv's voice and we vowed to find out more about them.

The four-piece are Livi (vocals / bass), Isaac (lead guitar / backing vocals), Layne (rhythm guitar) and Will (drums).  Lyrically it deals with how experiences can shape a person's personality or viewpoint on life and it's very clever in the way it tells its story - "You were The Beatles, I was the Rolling Stones, you were always more popular, but you can't deny I was cooler" and musically you can hear all the ingredients - tight tribal drum patterns, the guitar solo in the breakdown and Livi's expressive vocals that first drew them to us. The production might be raw, as you'd expect from a band in its infancy, but that adds to the attraction and excitement we heard in the song rather than detracting from it.

Machine are on Facebook. They play Barnsley Factory Music Rooms on March 29 with some festival appearances in the pipeline for the summer.

Email ThisBlogThis!Share to TwitterShare to FacebookShare to Pinterest
Labels: Machine