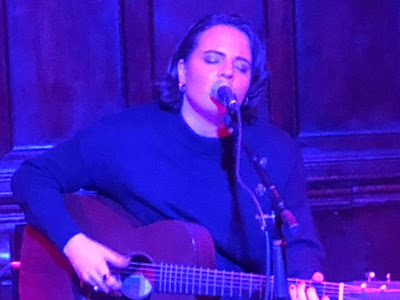 Georgie came to The Castle Hotel on Sunday night for a rare solo headline show treating the audience to a seventeen-song set of songs played on guitar and piano, mixing new material with tracks from her recent Georgie Live! album.

It feels like Georgie has been around forever. She notes herself this is the fifth time she's played The Castle's intimate (and sweaty palms hot) music room when she tells us how much she loves playing Manchester, and whilst the audience might not be the biggest she's played to, the reception she gets is universally warm and excited. Where she might now no longer play tracks like singles Company Of Thieves and her EP's title track Too Much TV, what there is in its place is a set of open, honest and exceptionally well-observed songs about the nature of life, the issues of love and friendship and being at one with yourself.

The first two-thirds of the set is performed on an acoustic guitar and what Georgie does so well before each song is to set the scene and tell us a little more about them, which allows us to understand where's she starting from and place ourselves in the story line. There's Every Setting Sun which is about being away on tour while her brother is away at university and in France and how she misses him, It Ain't You It's Me about finding a partner who can outdrink you or Tomorrow's Streets which is observations based on her Mum and Uncle (who was once a professional footballer who played with George Best who is now a lorry driver) and how as a child you don't notice that they're upset at not reaching all their dreams.

Some of the tracks are a little more personal. Hold Me was written in a hotel room and Georgie says at the end it's hard to play emotionally and physically (as she tells us, because we wouldn't have otherwise known, she doesn't play the piano that often). The Long Way Round is about taking some time out to find yourself, something she observes has found its way into many of her new songs, rather than drinking whiskey as she laughs when introducing Beer Money half way through the set. She also covers Bonnie Raitt's take on Love Me Like A Man which she describes as one of her favourite songs of all time.

The stripped-down format of the set allows us to fully appreciate Georgie's guitar playing technique which adds emphasis and depth to the words she's singing, eyes closed, throughout as the two combine to paint the stories of the songs, even the ones so new that she doesn't have names for them already. The way in which engages with us strengthens the bond of the story-telling, whether it be mistakenly calling Chasing Kites Chasing Pavements after telling us she'd co-written it with a guy called Egg White who had worked with Adele. She's not allowed to leave without an encore either, an old song called Wild Cat being resurrected, much to the delight of a few of the audience who have likely been at her shows since she first played here in 2015.

It's a bit of a mystery to us why Georgie hasn't make a major breakthrough yet, but we imagine it's down to the industry machine and her desire to keep things real rather than being moulded into something she's not as her independent spirit is very self-evident in these songs. It would explain why such a songwriting talent and accomplished performer and vocalist hasn't got the recognition she so richly deserves and which The Castle audience gave her at the end of a wonderful set.