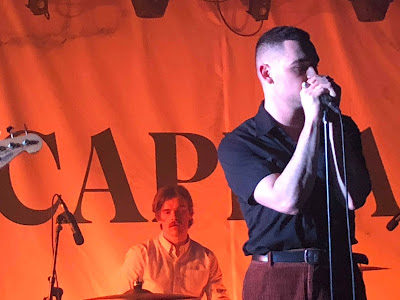 The Murder Capital's UK tour moved north on Saturday night to Sheffield's Leadmill for a sold-out show supported by Unorthodox Coolock and Egyptian Blue as the band of the moment continued their rapid rise through the thousand capacity venues of the UK to bigger places. 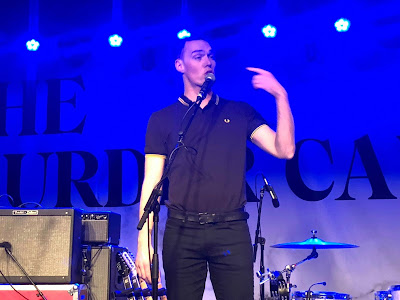 There's a direct line between Unorthodox Coolock and The Murder Capital that goes back to Dublin where they both have formed their different styles of art. In many ways they're the same, using it as a means of expression, of talking about the really bad stuff in life like suicide and fear of not being good enough somehow by just being yourself. What Unorthodox Coolock does is tell the stories very much from the "I" perspective and even if you've never been on the scheme in Dublin where a lot of his stories are based, you'll recognise the situations, the places and the events from moments in your own life if you've grown up without a silver spoon in your mouth to working class parents who are doing their best to get by.  He strikes a chord with the crowd and buoyed by the response he gets he grows in confidence. By the end of his set everyone is eating out of the palm of his hand and wants to get him a pint of the black stuff. He's an inspired choice of opening act to set the tone for the evening. 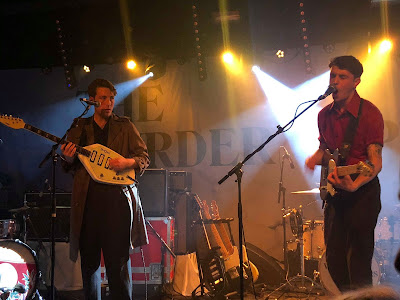 Similarly it feels like we've watched Egyptian Blue blossom on this tour into a band capable of filling venues of this size on their own down the line. The interplay between Andy and Leith is at the centre of what they do, switching, coming together and barking out the short sharp shock messages of songs like Skin, Collateral and Contain It. It's the rhythm section of Luke and Isaac that gives the duo the space to hammer home messages like "deception, deception" when they rail at the inadequacies of the political system and those that inhabit it on new single Never and "clock in, clock out" on the set's stand out track Four Is The Last Four, also from their upcoming Body Of Itch EP, where they share their frustration of being in jobs when they'd rather be out on the road like this doing what they love and what they do best. Hopefully that time won't be too far away on this evidence.

There's a real buzz and sense of anticipation at these Murder Capital shows as the lights suddenly drop and the opening bars of Burnt Out's Dear James strike out. It's a four minute warning for the carnage that is about to ensue and that's pretty immediate as James comes down amongst us, clears a circle in the crowd and then strolls back nonchantly to the barrier leaving a mass of bodies in his wake as the circle closes. Stood on the barrier, he delivers the final lines of More Is Less and two and a half minutes into the set there's bodies being thrown around. For Everything builds and builds and builds, every hit of the tambourine against James' hand stoking the fires until the walls come tumbling down as the song explodes into life like a dam breaking. A lone crowd surfer is hoisted up and James insists that security let him up on to the stage before sending him back to where he came after a hug.

When the set slows down for Slow Dance and On Twisted Ground the first signs of potential problems occur. It's a Saturday night crowd, the growth in The Murder Capital's popularity means they're a hot ticket and with that comes an element of the audience that isn't there to hear album tracks, particularly the slower ones, and whilst the majority just lose themselves in the hypnotic rhythm of the two-piece Slow Dance as the band congregate facing Diarmuid, there's some that have to talk even down the front. It's worse at the start of On Twisted Ground, but thankfully everyone gets the message eventually as James stands eyes closed, heavy breathing, lost in a dark moment that he's revealed to a thousand strangers who he treats like friends. 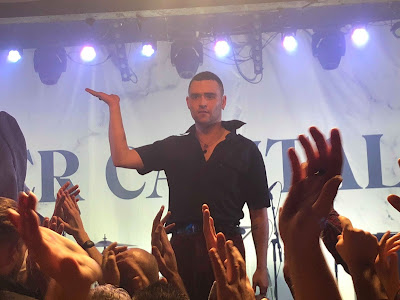 That's soon forgotten about as Green And Blue acts as the accelerant for the four-song onslaught that finishes off the set. For a band who's act looks so polished on first glance, and has caused comment in reviews recently, having seen them night on night you notice the differences, the slight twists and turns that the songs take that actually dispel that notion. You simply can't fake this energy and intensity, bottle it and pour it out every night for public consumption. James stands bathed in red light and utters three words, all the same, as he raises his arm, clenched fist and declares "love, love, love" like it's the most important word in existence, and in the world of The Murder Capital it is and looking round the room at people singing every word back, threatening to drown James out, that feeling is a shared one.

Don't Cling To Life just torches the front rows, bodies and arms being thrown around, a circle pit formed on James' command that closes as swiftly as it opens up. We're instructed to sit down for the start of Feeling Fades (or crouch for those of us who would never get up again) and it feels like a moment of coming together, albeit a constructed one rather than a natural one, yet it's another way The Murder Capital create a bond between themselves and their crowd. As they let loose at the first chorus, James dives over and above us and then into us. And then they're gone, no encore, no stretched out filling of time, another hit and run success for a band that has an unstoppable momentum propelling them forwards right now.