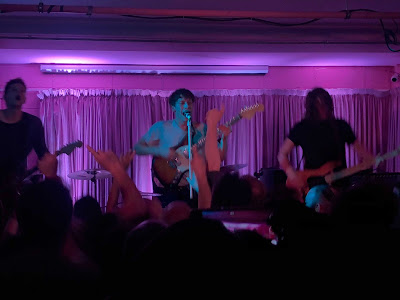 October Drift brought their Forever Whatever tour to Manchester's Yes on Monday night, performing the album in full plus two older tracks with a passion and power that's made for rooms many times the size of the Pink Room.

One thing you'll always get at an October Drift show is the energy of their performance, an infectious hurricane that comes from the stage and threatens to blow everyone in the room away. Kiran, Alex and Daniel, their front three, never stand still for the first eleven songs, leaping around the stage, or in Kiran's case on three occasions into the crowd who create the space for him to play and make his way to stand on the bar at the back, whilst Chris provides the backline that holds everything together like a rock.

The crowd at the front are well versed in the album tracks by now, even the newest ones, and at times it feels like we've been transported to a stadium gig, such is the way the front rows as one raise that arms to the roof and clap along in unison and without prompting. When that happens the connection between the band and their faithful feels like an unshakable bond - particularly when they strike into Forever Whatever's title track before the band get the opportunity to start to play it and go through the first verse and chorus. It's a relationship built on the hard slog that October Drift have taken over the past few years to get to this point - an album release on a label and a national tour to promote it with sold out signs dotted around and it's key to the October Drift live experience. 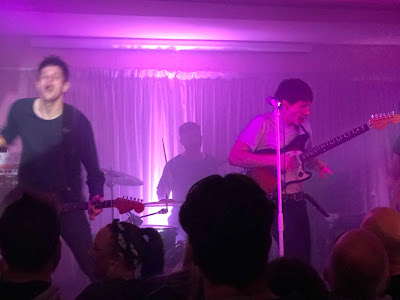 Old favourites like Cherry Red and Cinnamon Girl feel as fresh and invigorating as the day they were first played, but beefed up by the confidence that comes with the big stages across the UK and Europe that October Drift have strutted their stuff in the past few years since their release, whilst the newer songs wear the influence of the bands they've supported in that time (Editors, The Slow Readers Club to name two) but absolutely retaining the personality that runs through the DNA of an October Drift.

As the show comes to an end they finish with the album's closing track The Past which shows a more subtle and sensitive side to their performance without diluting the excitement they create and then Kiran stands alone, away from the microphone for most of the song, to deliver a final goodbye of Naked, once the chattering crowd at the back that seem to pollute most shows at this venue shut up, that has people singing along and coming together in unison. There's a sense of triumph here, that the long and narrow road October Drift have travelled along, picking up passengers along the way, is about to open up into a wide expansive freeway against the odds.

October Drift played Losing My Touch, Cherry Red, Just Got Caught, Don't Give Me Hope, Milky Blue, Oh The Silence, Lost, Cinnamon Girl, Come And Find Me, Forever Whatever, The Past and Naked.

Our album review can be found here and our recent interview here.