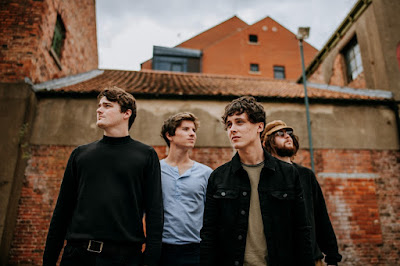 Fever might only be two singles into their career as a band but they've already picked up significant attention from the likes of This Feeling and both singles have been released via Blossoms' Very Clever Records label. We caught up with Joe for a chat as they prepare to go out on the road in March to support their label bosses on their UK tour.

Your name is a fairly simple one. Where did it come from and did you consider how difficult it might be to find you online with such a common word as your name?

It is, but it's difficult as every possible band name under the sun has already been taken at this point. We just wanted a rather blanket name that didn't give off too many preconceptions regarding the sound of the music and that we could make our own. Also, we didn't want to pick a name that might stand out more, but that we'd be embarrassed by in a year or two's time. Although Fever might be a fairly common word to find online, we're very much of the mindset that if the music's good enough, over time people will find us. Best man wins sort of attitude!

Things have happened pretty quickly for you. With one single under your name you were announced to support Blossoms on their big UK tour that's coming up. Has it surprised you how quickly it has happened?

It has and it hasn't really! What most people don't realise is that our singer, James, actually gigged with Blossoms four or five years ago with his previous band. He'd kept in touch with their drummer, Joe Donovan, and has been sending our demos across to him as far back as October 2018. Once we actually had some 'proper' studio recordings ready, they made the offer that we could release it through their label Very Clever Records. We've now put out a couple of singles (Jungle Man and Money Love) through their label and I guess the tour support is just the next step. We definitely don't take it for granted though, as they really didn't have to take the chance on us. It's just great that they're able to provide a platform for new bands like ourselves, in a way that most other bands don't!


And how are you preparing for such a big event so early in the band's career - it'll be very different from the size of gigs you're used to?

It's more the logistical side of things which is a bigger step up for us, more so than the gigs at this point. Obviously most bands who are touring at this sort of level usually will have a manager, tour manager, booking agent etc, where as we're still very much managing it ourselves at this point, with the help of Jordan Garner of Very Clever Records / SJM.

In terms of the gigs though, sure it'll be a step up but it's definitely the sort of venues we want to be in. Three fifths of the band have been on the local music scene in Hull for over ten years now, so we've definitely cut our teeth playing live, it's just been under the radar. We've also got a run of five shows in February for This Feeling to get us match fit in the lead up to the Blossoms tour!

You recently released your second single Money Love. Could you tell us a little about what the song is about?

Money Love is basically about being skint in a relationship, when all the other person is interested in is cash and materialistic items. Sound-wise, it's a little heavier than our previous single Jungle Man, but we felt like the music needed to reflect the subject matter. Hopefully it shows that there are a few different sides to the band which we'll look to continue going forward!

You only formed last year, which isn't long ago in band terms. How many songs have you written in that time - and are there any particular ones we should look out for as future singles or live favourites?

Although we only released the first single in October 2019, we've been in the rehearsal room for probably just under a year before that, so say October/November 2018. As a band we've probably made fourteen or fifteen tracks, of which only two have been binned and that's not because they were bad, they just didn't fit with the rest of the set.

One of our live favourites is a track called Electric which all being well will be released not long after the Blossoms tour finishes. There's also a track called Honesty that we close the set with and which everybody seems to buzz about after shows. Hopefully that'll be our big summer festival release!

How do you write songs - do you have one or more main songwriters or is it a more collaborative effort?

James is always writing, but it's more that he'll bring in a germ of an idea, say a verse/chorus and then we'll flesh it out together as a group. Everyone is such unique players in their own way, that I think it only really works when we trust each other to add our contribution! Jungle Man is the only song I can think of where James came in with the fully finished version with specific parts for everyone, but that was purely because that's the only song he demoed prior to the band starting!

You've come out of the Hull music scene. There's some great venues there like The Welly, The Adelphi and The Polar Bear How vibrant is the scene there at present and has the opening of the Bonus Arena affected that, giving local bands a hometown arena to target playing?

The scene in Hull is really strong at the moment, with the likes of The Polar Bear providing a platform for new bands with 'The Sesh', which is a free entry night every Tuesday. The New Adelphi Club is still a stalwart of local music community after thirty-five years, we also played an amazing sold out show there last month. This night is actually documented in our new video for Money Love!

In terms of The Welly, we'd love to be able to build ourselves up to be able to sell that out by the end of 2020. We're also really excited about the reopening of what used to the old Fruit space, which is now going under the name Social. This place is still held dear to a lot people in Hull and it's where a lot of us in the music crowd saw some of our most formative gigs such as Miles Kane, Mystery Jets, Royal Blood etc. So it'll be great to see its doors back open in April. With regards to The Bonus Arena, although it's still a pipe dream for us and most other bands local bands at this stage, it's great to be finally able to have a space that can house the likes of Blossoms, Courteeners, Noel Gallagher etc without having to travel to Leeds or Sheffield

And are there any Hull bands you know or who you've played with who you'd recommend us checking out?

There's always been ace music coming out of Hull, it's just never got the attention it deserves, but thankfully that seems to be changing. Obviously there's LIFE and The Hubbards who have both been doing great stuff and flying the flag for a few years now. In terms of newer stuff, there's the likes of Low Hummer & Slowdaze who have been getting airplay on Radio 1 and 6 Music respectively, through to up and coming artists such as Aimée Duncan, Downtown Kayoto and Mercy (technically from Howden and now lives in London, but we'll let her off!)

You're supporting Fuzzy Sun after the Blossoms tour. What plans do you have for the summer and beyond?

Yeah we can't wait for the show with Fuzzy Sun at Manchester Academy 2. We'd been saying for a while that it would be cool to do a show with another act on Very Clever, so this is perfect. In terms of the summer, so far we've got Stockton Calling, Live At Leeds & Liverpool Sound City all pencilled in, but we're hoping to be able to announce a few more in the upcoming weeks. In-between these festival dates we're looking at getting an EP recorded, which we'll hopefully be looking at releasing around September/October time. We figure the more songs people know, the better the shows. Saying that we've not had a bad gig yet, although we're still only on show number seven to be fair.

If you had to describe Fever to someone who had never heard of you, where would you start?

I guess that's most people at this point then eh! In all seriousness though, we always describe the sound as lending from the classic pop song writing sensibilities of The Beatles, The Coral, The La's etc but then crossed over with our love of big guitar bands such as The Strokes & The White Stripes. We think 'Jungle Man' & 'Money Love' are a great place to start, as they're both immediate and show two totally different sides to the band, but still within the same ball park. Hopefully we'll expand on this with the next single 'Electric' and definitely with the EP. The aim is just to not stand still basically!