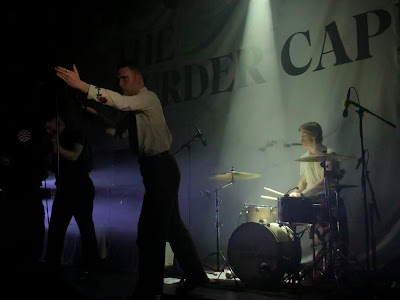 The third night of The Murder Capital's UK tour saw them brave Storm Dennis and make their way to Glasgow and the Queen Margaret Union. VLURE stepped in at the last minute to replace Egyptian Blue and Unorthodox Coolock won over the Glasgow crowd with his own unique brand of street poetry.

Whilst Egyptian Blue's continued illness means that they're not able to play again tonight, there is a silver lining as VLURE step in at the last moment. Their one track available online, a live video of Desire, made them one of the most exciting bands we discovered last year and the economics of the music industry mean they haven't made it to Manchester yet.

They start with Desire, a huge pounding dark yet anthemic song, that's even more thrilling in the flesh as Hamish jumps the barrier and joins us in the crowd, beating his chest like a man possessed. They set the paces racing in much the same way as the headliners, drawing you into their world, and posing the same difficult questions that when you answer them create clarity - on The Storm Hamish stands, foot propped up on the monitor, repeating "what is life? where is the sense? what's the norm?" 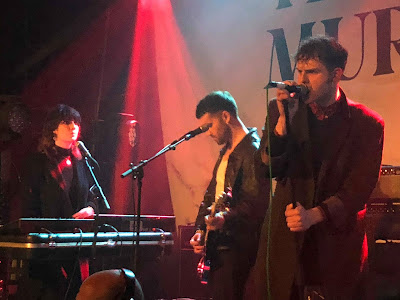 For a band with just one track to their name, they come remarkably fully-formed. The likes of The Storm and their set-closer Euphoria might possess many of the qualities of Desire, but they have their own personality and that of their creators written right through them. Sonically challenging, with bass, lead guitar and drums taking turns in propelling the songs forward, they are every bit as brilliant as we hoped and expected they would be - and then some.

Unorthodox Coolock is next up, and whilst there might be noticeably more chatter during his set than previous nights, the response to him is probably even louder and more engaged. He's clearly buzzing off the fact that people get what he's talking about - his tales of growing up and all the trials and tribulations that entails might relate to the working class Dublin suburbs which he comes from and the scheme on which he was brought up, but the majority of them could be transposed onto the streets of Glasgow or any other major city. 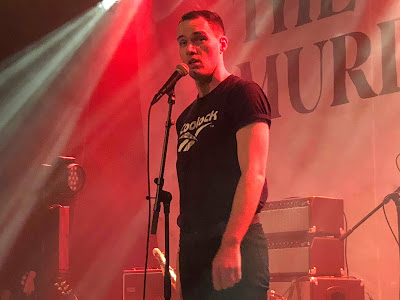 He tells us how close he was to giving this up until The Murder Capital asked him to go on tour with him and that camaraderie and looking after each other runs through his, and their, work, from the mates who helped him meet his first girlfriend at the age of fifteen when he was a frigid (he stops and explains this is Dublin slang for ever having kissed a girl) through to those that inspired him to be a poet as a means of expressing his feelings and experiences. He half-apologises for not being a musician, laughing at the suggestion he should sing, telling us he only does it in the shower, but there's absolutely no need. His set is a refreshing change and the crowd adore him.

Everything The Murder Capital are about is love. At the start of On Twisted Ground mid-set, James tells us that it's easy to feel powerless, to feel confused, lost and misrepresented, but what we do have is the way we treat our friends. It's an often-forgotten message in a society where self is king and anyone who doesn't fit your mould is fair game, but as James kisses Damien on the forehead, hugs Cathal and stands with his head rested on Gabe's shoulder or comes amongst us during both opener More Is Less and the finale Feeling Fades, placing his trust in us implicitly and totally, The Murder Capital are on a five-man mission to ensure that it's spread far and wide. 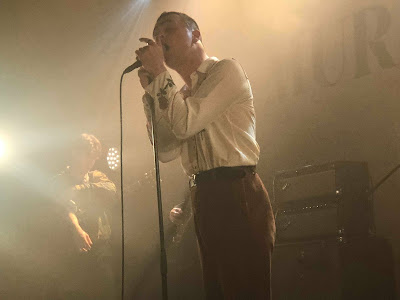 More Is Less starts the set at breakneck speed, the feedback that marks their entrance making way to a thrilling two and half minute headrush. Many bands will have a set of songs like this and send crowds away buzzing, but The Murder Capital's palette is far more widescreen than that and will open up exciting new opportunities for where their music will take them once they stop their unending tour and record When I Have Fears' follow-up.

The evidence for that unfurls in front of us. Green And Blue is a sprawling six-minute journey, never the same each night as it takes twists and turns, Damien extracting sounds from his pedal board over Diarmuid's tight rhythmic drumming that stabs and punches you in the gut as the song progresses. Slow Dance is an exercise of controlling the tension of the song, the inward-looking questioning of self of the first part of the song set against the brooding menacing threat of the music that unwinds in the second half as James takes a step back and breathes in what his friends are creating around him. The crowd move as one, as they do all night, drawn into the whirlpool that's pulling us all towards the stage. 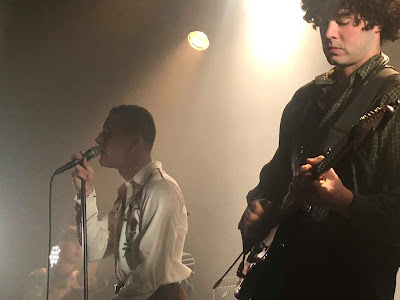 James points at his shirt and tells us he's not in a Valentine's afterglow and talks about the painful feelings that can exist at this time of year. It takes a while for the crowd to quieten down as Gabe's aching heartbreaking bass line ushers in a particularly poignant On Twisted Ground. It's a moment, amongst the chaos that surrounds it in the set, to take stock, reflect and remind ourselves in the horrible world we live, that your friends are the oxygen you need to survive.

As the applause dies down, James stands there emotionally spent, away from the mic and says three simple words "LOVE, LOVE, LOVE" and the set enters its cathartic second half where tired bodies throw themselves around the crowd to the soundtrack coming from the stage. There's a ferocious intensity that comes from the heart and the intuitive bond between the five brothers that gives these songs new life and power each and every time, ensuring nothing is left behind by the end of the night. The crowd respond in kind, even in the face of some over-zealous security. 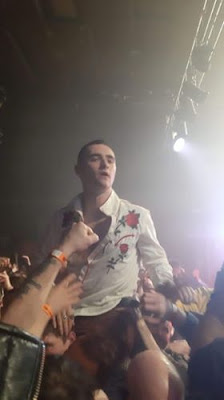 For Everything excites like the most thrilling white knuckle ride in the dark. James is drowned out by the crowd as he sings the darkest of opening lines - "I am a blissless star, corroded to the core" - which is made to feel like a communal exorcism of ghosts that plague us rather than the external expression of the inner workings of the mind.

Don't Cling To Life is accompanied by a stage invader who James insists has to come on stage despite the protestations of security guards. A hug and he's gone back to join the rest of us, lost in the whirlwind of Cathal's guitar and the emphatic "failing this, let's dance and cry" where once again James is drowned out by the sheer volume of the crowd taking the line and owning it like its the single most important message in the world.

Feeling Fades finishes the night, and us off. Firstly we all sit (or more accurately crouch) down under James' command like hypnotised disciples, the doubting Thomases being told to "get the fuck down" before one final explosion of energy that sees James take a flying leap over the front rows into the heaving pit where he's held up and returned back to the barrier where he stands aloft surveying his kingdom as the song comes to a close and he blows us as a kiss as the roars subside way after they've departed the stage mission accomplished.