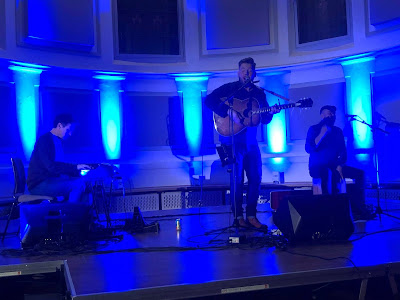 It's been a decade and a half since Liam Frost announced himself to the music scene with a host of bright new prospect tags attached to him. Fate and the machinations of the industry have meant that he's never had the accolade he's deserved as one of the finest songwriters of his generation - and with the Pledge Music debacle which crippled the release of his third album The Latchkey Kid still resonating, he's decided to stop performing under his own name. His show at the resplendent surroundings of Halle St Peters church meant that he went out with a bang.

Reid Anderson opens up proceedings with a set of tender delicate songs that the crowd pay the appropriate respect to, listening rather than continuing their conversations. His songs deal with stories of love and loss, like We Would Have Noticed The Moon, Crossover The Road, You're Lovely, Another Sad Story and Clocks before finished on a long 23 Skidoo, where he catches the audience out with a false ending. His voice possess a rich depth which combined with his intricate detailed guitar playing creates a perfect opening half hour before Liam's long-awaited set. 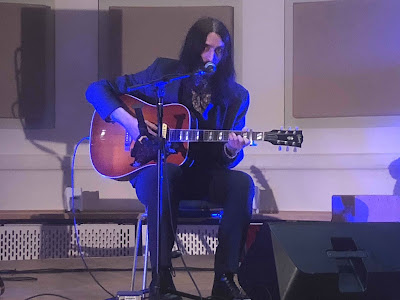 We're sure Liam has heard a million times from well-being fans that he should have been huge, the comparisons as "an English Bright Eyes" should be being made at eye-level rather than where they both stand and that his three albums - Show Me How The Spectres Dance, We Ain't Got No Money Honey But We Got Rain and, more recently, The Latchkey Kid - are the equal of anything penned by a songwriter in the past twenty years. All of it's true of course, but only a select few have the inside knowledge to have witnessed it and bear testimony to it - and Halle St Peter's is full of people who hold such an opinion as Liam takes a two-hour journey to reverential silence through his back catalogue for one last time.

He's joined for parts of the set by friends and long-term collaborators Christian Madden on keys and Pete Marshall on mandolin and violin. It allows him to move between solo performances and expanded versions of songs as he chooses the most appopriate way to perform each of them, showing both the versatility of the songs that is down to their simple brilliance as well as the intuitive relationship he has with the pair.

A trio of band songs kick off proceedings - Going Steady, This City Is At Standstill and Your Hand In Mine representing each of his three albums in the opening section. The songs capture so eloquently the trials and tribulations of growing up then growing older, the neatest trick a musician can perform, making something so universally relatable yet still personal and heartfelt when delivered in such a rarefied place as this.

Christian and Pete depart to leave Liam on his own. Stripped back, the likes of Didn't It Rain?, Shall We Dance, Is This Love, Hall Of Mirrors Rope Of Sand, Skylark Avenue and The Slow Knife feel even more poignant, particularly as we know it's the last time we'll hear at least some, if not all, of them as Liam takes his new career path. He does later tell us thankfully that he's not giving up music just moving in a new direction so he won't be lost. The crowd sit in silence while he plays, apart from a worrying train of people constantly going to the toilet, and give the songs the response they deserve at the end, one gentleman at the back shouting that Liam's songs were the ones he played at his wedding which brings a huge smile to Liam's face. 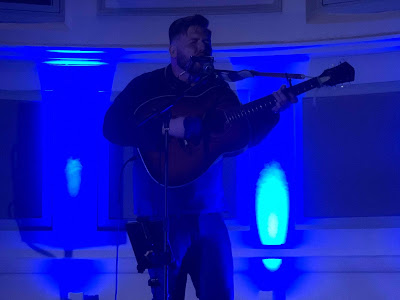 She Painted Pictures and Roadsigns And Redlights are performed with just Pete accompanying Liam before Christian comes back for two songs from the underappreciated The Latchkey Kids - Follow You Around and Smoke, both of which show that Liam has lost none of his songwriting craft over the years and has developed it still further. That The Latchkey Kids' release got delayed, split in half and never really got the attention it warranted is a damning indictment of the state of the music industry, the media and the press around it.

Liam's on good form, joking about him hardly ever playing acoustic guitar so it keeps going out of tune, forgetting some of the lyrics to Smoke and requiring audience assistance and wondering whether the hair he found in his microphone is pubic. The smile on his face tells it all, a happiness when he's in this place in front of people who love him and his music.

Try Try Try has been shouted for a couple of times so he dedicates it to the person who called for it and If Tonight We Could Only Sleep is given a gorgeous stripped down rendition. While the majority of the crowd fell in love with Liam's debut Show Me How The Spectres Dance, he's equally determined to show off his latest work and rightly so - the three-in-a-row solo section of Pomona, Lover Trouble Knows My Name and When I'm Alone, the former a very open dissection of a turbulent time in his life and the latter one of his favourite songs of his ever, show The Latchkey Kids to be the equal of its older siblings.

Christian and Pete join him again for the finale which starts with Who's Gonna Love You from that album. It's followed by Liam's masterpiece, The Mourners Of St Paul's, in our humble opinion one of the greatest songs ever written, telling of the despair and confusion of a young man who's lost his father. There's tears around the hall, but also a sense of warmth and feeling that you can get through it.

The final song is aptly one that Liam has rarely played, but Leading Lights And Luminaries tells of plunging the depths of despairs, close to a bitter end, and having music rescue him, singing these broken melodies to us, his audience, to help him and us. The line "if this is to be the last time that I ever get to do this, then I just want you to know that songs can save you in an instant" captures everything so life-affirming and vital about music for both artist and listener in one sentence. Liam might not be going forward playing under his own name, but he's going nowhere. And we'll follow him whatever his path might take.

Our review of The Latchkey Kids' album can be found here.