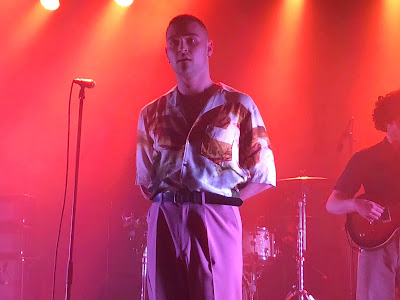 The Murder Capital rolled into the capital on Friday night for a sold-out show at Camden's Electric Ballroom where 1,100 people witnessed a band on an unstoppable ascent to the very top with a forty-five minute set that at the times threatened to finish us all off. Support came from Egyptian Blue and Unorthodox Coolock. 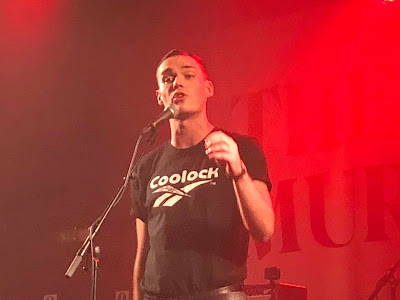 Unorthodox Coolock opened up proceedings, before later on in the headliners' set stage diving above us twice. In many ways he's a fan of the band just like the rest of the crowd, but with the opportunity to stand on stage with a microphone and tell us stories about his childhood, his hopes and dreams that were shattered and friends lost.  Music and his poetry is a way of coming to terms with events like the suicide of his friend (and friend of the band) Paul Curran about whom his last poem of the night is about. Warm, genuine, engaging and developing a little of the showman about him, his opening set is a welcome change to the buy-on bands that you often see opening shows like this. 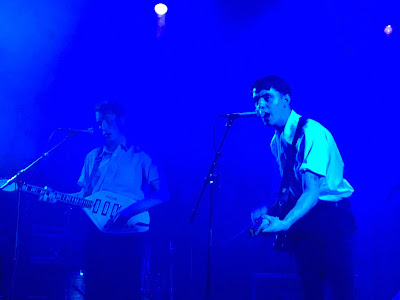 Egyptian Blue are main support, here for the same reason as Unorthodox Coolock, because of the bond between themselves and the headliners. They deliver a set that makes us think that one day we could see them on top of the bill in here - such is the way they grow into the bigger venue. New single Never, with its cries of "deception deception" appears mid-set and is delivered with an anger that makes you know they mean this, the interaction between Leith and Andy's vocals throughout the set keeps it fresh, invigorating and exciting as it creates a tension that you can cut through.

By the time The Murder Capital make it to the stage the place is so packed, it's nearly impossible to move, but move we do as James first stands on the barrier and then jumps down among us on opener More Is Less. Where we feared how they would make the connection with audiences in these bigger venues with pits, it's set aside within ninety seconds as he shouts back to Cathal on stage "take it away Pumpy" and he's lost in a sea of bodies, somehow finding his way back to the barrier with the microphone intact.  Connection made, For Everything builds and builds and builds like a pressure cooker waiting to explode and just at the point where it gets too much they release the valve and the front half of the venue becomes one steaming mass of bodies. 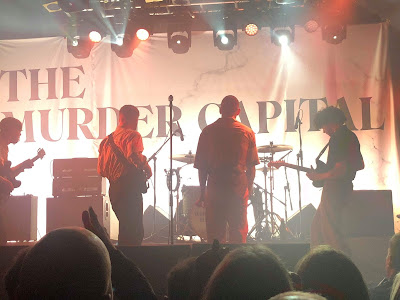 Slow Dance offers some respite, the band demonstrating their mastery of the more restrained moments of When I Have Fears. Their critics, of which there are only a few, have commented on the choreographed nature of these moments, but having witnessed them night on night they are always different, the connection of the band with each other is what makes them feel so perfectly atuned to each other.

On Twisted Ground is prefaced by James asking how we all are in different sections of the venue, praising both Unorthodox Coolock and Egyptian Blue, laughing about it sounds like he's preaching in an assembly hall as he tells us how much the UK feels like home now, before dismissing thoughts of them leaving their native Ireland before reminding us to look after our mental health and our friends. The whole place descends into silence, a reverential hush pierced only by Gabe's bass that strikes like a red hot needle lancing a boil, the desperate sadness of the song has people in tears.

Green And Blue brings the pace back up and you sense the band have adopted the approach of letting the song take its own path to keep it fresh. Diarmuid's drumming drives it along, the tight rhythmic patterns right at the core of the journey it takes us on. 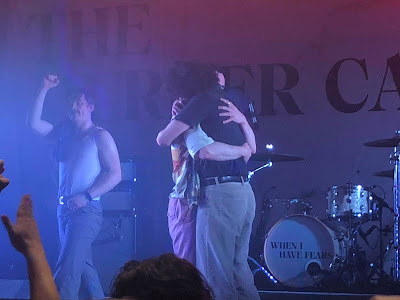 Love Love Love sees the stage bathed first in red lights as James leans his leg on the monitor and surveys the sight in front of him. Twelve months ago they were playing in the UK to crowds of dozens if that and tonight they've filled one of London's most iconic venues weeks in advance yet it feels like the most natural trajectory as hundreds of bodies heave themselves around.

Don't Cling To Life is a two and a half minute headrush, an invitation to completely lose yourself in the whirlwind that's coming from the stage and to end it battered, bruised but completely exhilarated by the sheer power of the five men in front of you. We're asked to sit, get told to "get the fuck down" as some try to stand earlier than the chorus and then we throw ourselves into the melee one last time for Feeling Fades, joined by James surfing over our heads and then carried back to the stage on a sea of arms.

As they take the plaudits, looking out over the biggest crowd they've headlined to in the UK so far, there's a sense of both triumph but also humility. The huge bearhug that James gives Damien is replicated by friends, male and female, around the venue. And that is, their magnificent debut album aside, exactly what makes The Murder Capital the single most important band out there right now, a shining beacon of love and light in a world of hatred and darkness.