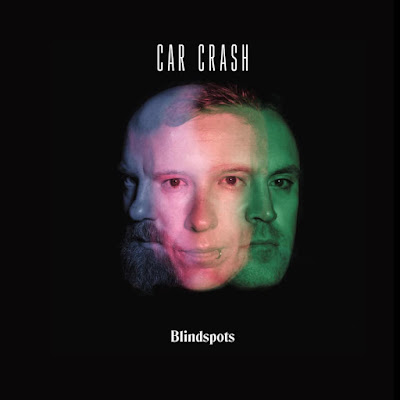 Car Crash have just released their debut album Blindspots and we caught up with JD to find out more about the band and their origins, the characters in their songs, internet dating, political echo chambers and the current success of Irish music.

Could you introduce Car Crash and tell us a little about how you got together and the history of the band to date?

Yep, we are a loud post punk alternative band from Dublin. There are four citizens, Jay is the master of percussion, Shane manages and directs keys and guitar, Sorsha conducts bass proceedings and myself, I do the guitar/vocals. Jay and myself have been friends/lovers for a brilliant chunk of time and have been playing together in various bands, guises and role plays for nearly two decades.

We began this band together in 2013, we named it I Am A Car Crash which was to poke fun at a bad bad time I went through mentally, it also didn’t seem to give an any indication of what our sound might be. Ya know, if you see a band called Devil Fist you know what you’re gonna get. Early on, we recorded a scrappy punky EP named White People Problems it was pretty much just the two of us that done that.

In 2015, Shane overheard me play a song to a friend on my phone in a smoking area and asked if he could jam with us, soon after: the rascal had joined. The missing piece was Sorsha, we joined her in 2019 became Car Crash, the band has never been in a better place, perfect lineup, we are sounding fabulous making our loud songs.

There's a number of characters in the songs on Blindspots - particularly in Eric, Gym Bunny and What Happened To Building 7 - are these based on people you know or are they more generic observations about society?


The characters on the album, I guess, in some ways are versions of myself. In What About Building Number 7 I’m poking fun at a past version of myself that fell for every conspiracy theory out there, while trying to make others laugh who are maybe currently in that headspace.

Gym Bunny is just a result of being exhausted by the ever-growing superficial dating scene, using tinder etc. I imagine most people feel it’s painful emptiness, but it’s defended as a necessary evil.....if you’re single you need it, in the same way if you’re in a band you must be on social media platforms building your illusory brand. They are very different yet paradoxically similar windows where horrible can be queen and king. I can barely stand that noise with the band, so I detested it far more when it was applied to my private life.

In the album's lead single Them Not Us, you talk about "echo chambers of confirmation bias" and the lack of political discourse these days with people only talking to those who agree with them. We've certainly seen that in the UK with Brexit and Corbynism where views have been strong and entrenched. Is that sort of behaviour prevalent in Irish society too?

Yeah, that behaviour is there but it isn’t as problematic in Irish life, though we must be wary and learn lessons from our neighbours. The right is on the rise worldwide, it seems. Currently I’m proud of Ireland in many ways – we are outgrowing religion, which ruined us for centuries, and moving forward. I’m positive about that.

Your interpretation of Them Not Us is pretty spot-on. I feel so strongly that to progress we mustn’t be on teams, we must challenge our own views. Our views or opinions aren’t us, it’s OK to change them. It’s fine to be in the centre, it’s good to view things in many lights with many lenses. The Palestine/Israel conflict is perfect for displaying that, as is Brexit, Trump, Michael Jackson fans, climate change....it’s all very weird and I only hope we come to our senses.

There's an argument that music has become diluted and afraid to address contentious issues. Across Blindspots you seem to actively seek to confront rather than ignore - do you believe that people still want to be challenged by music in a world where reality TV seems to be taking over entertainment?

These days I tend to look mostly at what we are doing, it saves me from screaming continuously. I don’t partake in watching horrible vacuous idiots crave attention either ironically or because I like it no more than I wanna partake in showering with T-Rex. People do want to be challenged, or ‘challenged’ that the right word, maybe not, eh people don’t just want empty crap but those that really want some depth really have to search for it.

I feel strongly about just doing what comes natural to us. We never try to fit in a box, sanitize ourselves or guess what others want to try make a gain, I couldn’t imagine anything worse. We don’t go looking to court any kind of controversy, I don’t view the songs or subjects in that way, they are just interesting to me/us as ideas and sounds. It’s only us being us, we speak and create freely, artistic license really matters. You can be given the lazy ‘outspoken’ tag which for some reason has an odd negative connotation. It’s better than ‘say nothing drivel’, surely.

I think people like us cause it’s good loud music, there’s more for the listener if they want to tune in lyrically or to Jay’s intricate percussion, levels mannnnnnnn.

Individually, all of us on this planet seem to look at people collectively as stupid which is an odd paradox. I don’t, or try not to do that, hate is easy, look around. People have just been spoon-fed pure unfiltered shite painted in glitter by a minority of focus group loving cynical donkey necks, who know nothing of music or art.

We are very proud of Blindspots. We did it properly, broke our hearts backs and patience which should count, and it’d be great if people on our page and other pages got to hear it.

The album is quite diverse musically. Is that a reflection of the musical taste of the members of the band or just something that happened once you got together to write?

For me, they’re all just Car Crash songs, they all make sense in that universe. Each song comes out the way it comes out. It’s a tough process to speak on because of its distinct lack of process. If that sounds smart or doesn’t make sense, that’s OK because I understand it the least. But just to be clear, all the sounds on the album are treated fairly and equally regardless of their instrumental origination.

Bands seem to be increasing merging visuals with their music. Is the lack of videos for songs from Blindspots a deliberate attempt to focus people on the music or down to economic necessity?

Lack of a video… Yes, we’ve spoken about this and are toying around with a few ideas. I wish it was a medium I was good at, but sadly I’m not and I’ve no patience for it. So.......shit, I wish I could say it’s because we just want you to listen to the music man, though that’s wanky-sounding. All I can say is we will do a video at some point. Is it just a another revenue stream for people to leach off artists? Who knows? We will do something. If only I could just do it on my phone. Maybe I’ll get a tripod and become an influencer.

There seems to be an endless stream of bands from Ireland breaking through at present. Do you see yourselves as part of a scene or do you distance yourselves from being seen as part of a movement?

Yeah, there are lots of brilliant bands busting outta Ireland recently. We are more than probably directly responsible for every last one of them, in some way or not others!!!!

We are very proud to be associated with them all of late. Naturally, Irish people are loudmouths and that’s such hot candy right now, so it’s loud people making great music!!Sure to be sure, what’s not to like there? :)

Are there any plans to come over to the UK and play some shows?

We would love to get over to the UK and do some gigs. It seems to be a buzzing place that’s really responding to what we do (that’s according to our latest data) so we’d be delighted to do that. We are speaking to people, more to follow on that I guess. Call your local venue and demand us now!

If you had to describe Car Crash to someone who hadn't heard of you before, where would you start?

Where would I start?... I’d just say we are loud, abrasive, positive, cheeky goodness, like Talking Heads being slapped around by pixies wearing Whipping Boy T-shirts. That’s surely a clear and attractive picture. Buy the album and come to a show, tell me different ;)

Blindspots is out now and can be ordered on blue or pink vinyl here, limited to 150 of each, and with 30 purple vinyl to be sent out at random.