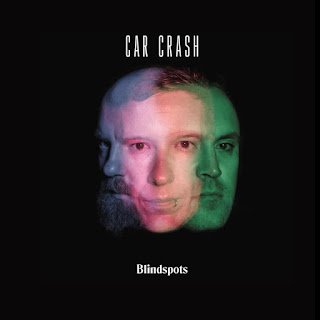 Blindspots is the debut album by Irish post-punk band Car Crash. Across seven tracks social expectations, political and religious intransigence and conspiracy theorists all fall into their crosshairs and are dealt with a directness and honesty that society could do well by adopting.

The album opens with Eric, and you suspect names have been changed here to protect the guilty, a guy who's trying to be a hipster - "he buys his jeans in Urban Outfitters, pays £120, he's on the dole" - and whilst the song is focused on one character, its wider message is aimed at people who try to impress but are trying too hard for it to be genuine. It aims at the fake - "Eric is the problem with our society, Eric doesn't see everything he believes" - which is a damning indictment. It does offer advice though, a vocal that sounds like the voices in his head talking to him urging him to "Eric, get yourself a job, get out of your home." Musically it moves around the place, restless, never settling which creates an uneasy tension.

Them Not Us is a caustic put-down of those who live in their echo chambers, incapable of any rational debate of anything and stuck in their own mindset - a damning reflection on what passes for social and political analysis and commentary these days. Lyrically it takes aim at the nonsensical nature of much of the debate that goes on via social media channels - "Everybody's arguing over absolutely nothing. On the internet there's a lack of intellect"- before rounding on the insular nature of the people who inhabit such places - "I can't be friends with anybody who doesn't agree with my point of view..... echo chambers of confirmation bias" and the on-going debate that seems to be as prevalent to them as it was in the UK election recently - "support Palestine, you're an anti-semite, support Israel, you're an islamophobe."

Drawings aims its disregard at religion, declaring "I don't feel at home in anybody's hope" whilst dissecting the hold that religion has on society and how it's used to stop progress and modernity and to oppress people. It pulls no punches, favours no one and captures much of what is wrong with modern society.

What About Building Number 7 is a half-spoken attack on conspiracy merchants and believers - "I don't doubt that Jesus Christ lives inside you" - who end up watching You Tube videos in their bedrooms and hiding from the supposed illuminati, poisoned water and vaccinations. As the song progresses, the role changes to that of the believer who repeats "I did my research" before ending by referring to a building that was destroyed in 9/11.

Gym Bunny is about a woman who's been on "700 tinder dates" and is boring them with her stories when her obsession with the gym ("she works out fifty times a week, look how she wears her fake tan"), going to mass and finding the right guy is the root cause of her unhappiness and turning off her friends from her. The half-spoken half-sung lyrics make it feel like urban poetry set to music rather than song and makes the observations feel even more acerbic - the "am I boring you because you're boring me" a repeated and dismissive put-down.

Wahoo feels light in comparison at first, but as the drums kick in and it stops and starts multiple times refusing to stand still, it's very much on edge although the song's title being sung over it lightens the mood somewhat. It's more a collection of ideas than a song structurally.

The album finishes with Violent Drift, another song that has a scattergun approach that keeps the listener on their toes throughout, tight, taut drum patterns in parts and more widescreen hook-driven sections as it quietens down before concluding in a headrush where vocals and guitars fight for space and to be heard. Lyrically, it deals with using young men as weapons in wars with no regard for the consequences for them and the "psychological torture" that they're exposed to.

Blindspots is a real curate's egg of an album. It has its roots very much planted in post-punk, but it refuses to be defined by that label, shooting off in multiple directions. Lyrically it's acutely observed, characters are coloured in rather than just outlined and Car Crash pull no punches about the ridiculous approaches people take to political and social situations that cause so much division and mental health issues when the facade slips. It's a record that the people it takes aim at should be made to sit down and listen to.

Blindspots is out on February 14th and can be ordered on blue or pink vinyl here, limited to 150 of each, and with 30 purple vinyl to be sent out at random.