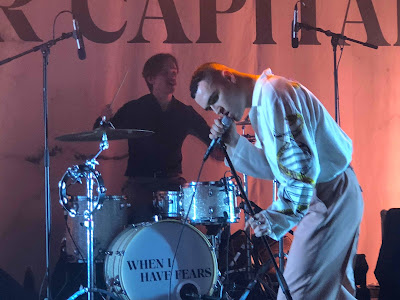 The Murder Capital's sold-out Vicar Street show was a sort of homecoming at the end of their triumphant UK tour where they filled venues across the land and left a trail of exhilarated gig-goers in their wake. The biggest show they've played so far in their adopted hometown brought friends together, celebrated those no longer with us and set a marker in the sand before they head off to conquer America. 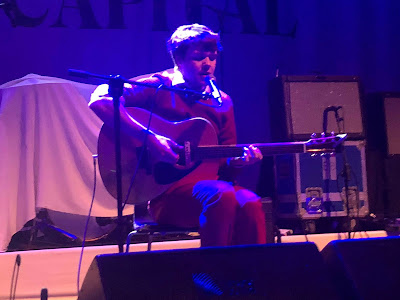 Junior Brother opens up proceedings with two friends in tow who play mandolin, flute and bodhran. With the bars at the side of the venue catering for people who don't want to catch the supports, his beautiful music is granted the attention it warrants from the crowd in the main room. His heavily accented vocal adds immense warmth and a real depth of his personality to songs like Hungover At Mass and The Back Of Her. While it's a million miles away sonically from the headliners, there's a sense of connection that runs through the evening, evidenced when he's invited to stage dive by The Murder Capital during their set. 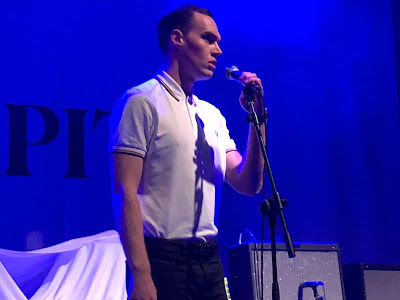 Unorthodox Coolock is next and dedicates his set to Paul Curran, friend of him and The Murder Capital who committed suicide two years ago and who was Craig Doyle (to give him his real name)'s inspiration to take up spoken word. His poetry is a thing of beauty, evocatively describing the challenges facing a young man at home and in the wider world of growing up in one of Dublin's roughest areas; the snatched joy of a night out with friends to chew the fat over a dozen beers and a late night takeaway, the teenage trauma of falling in love and having your heartbroken, the dedication of working class parents to their kids despite borderline poverty and his own discovery of poetry as a means of escapism and salvation. With equal parts smiles and tears, his words are beautiful and stretch far beyond the suburbs of Dublin to any young man growing up in a working class community anywhere. 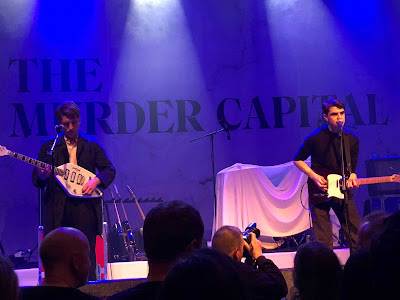 Egyptian Blue might be the outsiders from the across the water tonight, but they're treated like the most welcome house guests by the Dublin crowd who have now filled out the crowd in the room. To Be Found wields a mighty punch, a one-two smack to the face as Leith and Andy's vocals combine to hammer home the urgency that runs through their whole set with their two guitars, Luke's bass and Isaac's drums creating a phenomenally exciting thrilling sound that hits a nerve with the Dublin crowd. New single Never has a cascading anger at the ability of social media to deceive running through it delivered with a passion that shows you they mean it, whilst the set-closing duo of Collateral and Contain It from their debut EP have a real edge to them that demands your attention and focus. The Dublin crowd quite rightly love them. 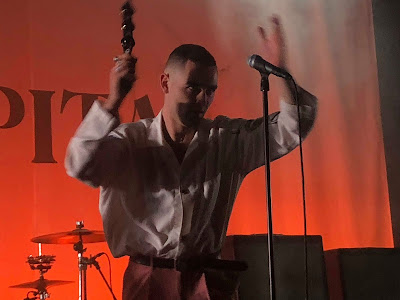 There is a huge sense of anticipation in the room as the two Burnt Out songs Joyrider and Dear James fill the beautiful venue that is Vicar Street. It's been six months since The Murder Capital last played a show here on album launch date across town at The Button Factory and a lot has happened in the meantime for them across the waters, but Dublin still proudly sees them as their own.

Any sense that the band might be overwhelmed by the occasion are quickly dispelled as Gabe, Damien, Cathal and Diarmuid make their way onto stage through the wall of feedback let off by their tech and start into More Is Less and James saunters onto stage, observing everything around him with that inquisitive stare of his that draws you into their magic. The sound is just about perfect, you can hear the subtleties in the guitar work, the separation of bass and drums despite the fact that the song's headrush adrenaline just invites you to lose yourself in it. James comes over the barrier, forms a circle pit, holds people back until he's ready for it to converge and makes his escape back to the barrier as it closes. 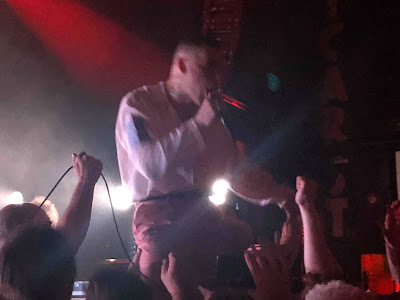 For Everything has a brooding intensity in its intro, James hammering the tambourine into his wrist, the crowd clapping along in time. Everyone knows when the song is going to explode into life, but the controlled power with which The Murder Capital operate still lifts everyone off their feet when it does. The Murder Capital are far from just a one-trick pony though which is what stands them so far out from their contemporaries. Slow Dance, in both its component parts, demonstrates their absolute command at lower tempo and volume without losing any of the intensity of the set. Its waltz-like qualities draw you in like an invisible umbilical cord and you find yourself completely immersed in it, just as James is when the instrumental second part of the song comes in and he wanders across the stage to admire and compliment his band mates with a knowing look, a hand on the shoulder or a kiss on the cheek.

On Twisted Ground has particular poignancy here in a city where the man to whom it was written was adored by so many in tonight's crowd. James dedicates it to a list of names that is a stark account of the human cost and the frequency of it that mental health charges on us these days and reminds us to make sure we talk to each other and be there for each other. The room falls silent, tears flow on and off stage as the song laments the massive void that is felt when someone is no longer with you.

Green And Blue kicks in and the crowd returns to a seething mass at the front, but it's a throng of people connected by love to what's going on up on the stage. You see James looking down, searching for a connection, which he does on Love Love Love that follows by jumping off stage and singing part of the song to a woman on the barrier. We're inches away and his eyes never falter from direct gaze as he sings, a magical moment between two people shared with a thousand. 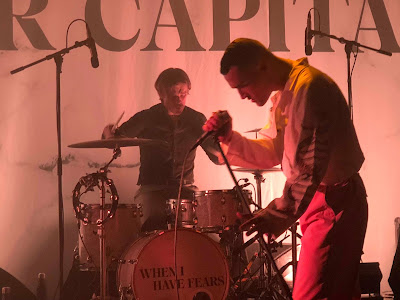 Don't Cling To Life goes past in a whirlwind, its message unmistakeable to live in the here and now and savour every minute like it could be the last, a counterpoint to the likes of On Twisted Ground. It's line "failing this let's dance and cry" is so simple yet absolutely vital, a mantra to deal with the darkest of thoughts, a design for life. Unorthodox Coolock sails over our heads crowdsurfing and it feels just like the most perfect moment.

We're asked to sit, then to "get the fuck down" for the opening of Feeling Fades, the final moment of the night a mass of bodies throwing themselves around for one last escape, James lying on his back above us, legs in the air, bellowing "la la, la la la la" of the refrain like the rest of us. As he lands back on stage as the song crashes to an end, Gabe lets go of his bass and is millimetres from taking James out. It's a fine margin, close to a disastrous end to the night, but it's those margins you sense The Murder Capital are operating on emotionally, paraphrasing the line "they kept us all together" on Feeling Fades as how important the connections this band makes are to themselves and to the people who follow them.

Who knows what the future holds for The Murder Capital as they set sail to America to take on the new challenges that will await them there and their minds inevitably turn to the gargantuan task of somehow following up When I Have Fears, but what they give Dublin tonight, like they've given the UK over the past six months, is memories that will never be erased, a clarity of thought and purpose that builds communities, tells us that it's ok to be vulnerable, admit you're struggling and to get help through the most simple yet often most difficult to achieve means of opening yourself up and talking to people.