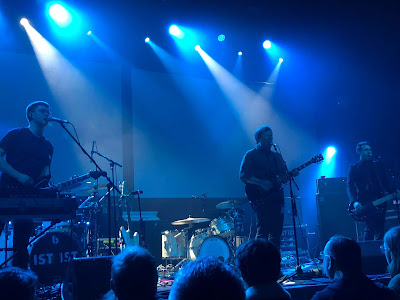 Ist Ist opened up the night for Ladytron at Manchester's Ritz on Saturday night with an early set that showcased both their forthcoming album Architecture as well as revisiting their two EPs Spinning Rooms and Everything Is Different Now and demonstrating that they're ready and waiting for playing these big stages in their own right.

For a 6.30pm slot there's a healthy number of people already in The Ritz to capture Ist Ist fulfil their commitment to play this show that was cancelled last autumn because of illness, including as Andy tells us a healthy number of people wearing Ist Ist shirts which is a great feeling for the band playing a bill where they stand out like the proverbial ugly duckling to Stealing Sheep and Ladytron's more refined electronica.

Ist Ist's way of working is a much more robust and direct one. Across eight songs, perfectly chosen and already sounding like the first half of a greatest hits album, they demonstrate both a consistency of sound, but also an ability to cast light and shade onto darkness and create something quite potent and beautiful.

Wolves starts the show, as it does their forthcoming Architecture, with a sense of foreboding as the electronic noise unsettles before the song opens up and shows the more widescreen side of the band. They're using backing vocals more to give the songs lift, not that Adam's deep often baritone voice needs much of it, but it's these subtleties and the cognisance of them that marks out a band that's in full control of the way they project. Silence might draw the nonsense comparisons with Joy Division that come from people who clearly haven't spent any time listening to either band because of one hook line, but its chorus is very much of the here and now, something that the main protagonists of the post-punk resurgence would kill to have in their repertoire. 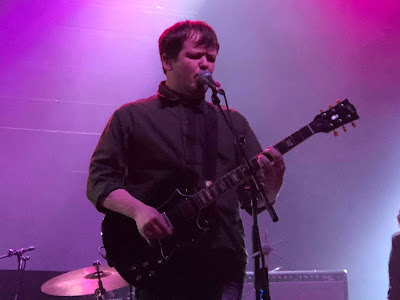 Jennifer's Lips, Emily and Exist demonstrate that they already have pretty much a perfect debut album (think Ride's Nowhere if eight songs isn't enough for you) across their two EPs released in the last two years and both expand to meet these less confined spaces. The Ritz's sound is unusually transparent for a support band so you get to hear the clever layering in Mat Peters' synths and the real detail in Joel's drumming.

They finish with You're Mine and Black, two songs already revealed from Architecture, that show that they're becoming more potent and eviscerating with every passing song - combining their underlying doom with a chorus that you, and looking round The Ritz everyone else, can sing along to. They build, brood, bulldoze and batter you into submission, Adam's vocal right on the edge, every single ounce of emotion being channeled towards the microphone.

Ist Ist are currently ignored by the tastemakers of the industry because they're unsigned and doing things their own way rather than being part of a cabal that places excessive importance on who you know in the way The Slow Readers Club were before the noise around them made it impossible to ignore them any more. If the way they own the stage in The Ritz is anything to go by, that time when those walls crumble won't be too far away.