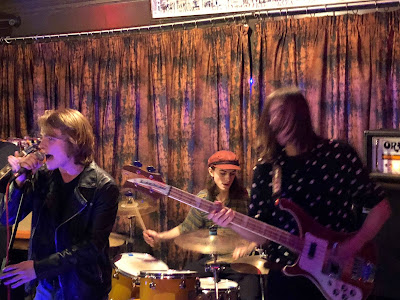 To celebrate the impending release of new single You and an extensive UK tour, Dirty Laces announced two last minute intimate shows at 33 Oldham Street for this Sunday night that sold out in minutes when put on sale earlier in the week. We caught the second of the night where they demonstrated their continuing evolution as a band and introduced new material into the set. Support came from an acoustic solo set from Cobain Jones.

Cobain Jones is getting his name known around Manchester right now, from appearances on local station XS to twitter recommendations from the likes of Liam Fray and Tim Burgess to appearing as support on a number of sought after support slots. His eight-song set features six originals and two covers (The Beatles' Yesterday and a medley of The Charlatans' North Country Boy and Tim Burgess's Oh My Corazon). 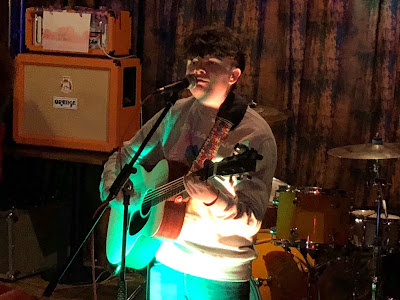 Whilst he puts his own interpretation on the covers, it's his own material that the focus should really zoom in on. For a young man who's new to the game his songs possess the ability to appeal to anyone, taking the influences he talks about and distilling them into something of his own. They're articulate, well-structured and with the potential to become huge singalongs when paired with a band. It's so easy for young musicians to try and sound like carbon copies of their heroes and whilst you can hear them in the songs, they're echoes in the background rather than centre stage. In particular Wonder, She Plays and his final song Listen make his Ravenhead Demos and Acoustic EPs well worth tracking down and it'll be interesting to hear how he develops them when he plays full band shows in the summer.

Evolution of a band is essential in the formative years and it's something Dirty Laces have taken on board in the last twelve months and become a formidable live outfit with a sound that's distinctively theirs rather than something a little too close to what's gone before for comfort. They've done this with both their old material - Back Of The Line, Set In Stone and Lose Control in particular feel like they've been on a borderline illegal course of steroids from a year ago - whilst their new material is impressive in both scope and reach.

New single You, due for release next Friday to coincide with the start of their tour, starts up with guitars from Luke and Jacob that have a potent power to them without losing the prerequisite of a hook to draw the audience in. It's a many-faced song, stopping then restarting and stretching out past the time you'd normally expect a single to last, but a sign of the ambition in their songwriting. Another new song and potential single Exile demonstrates a similar coming of age in their development as a band with an urgency that's backed by guitar riffs that threaten to blow the audience away. 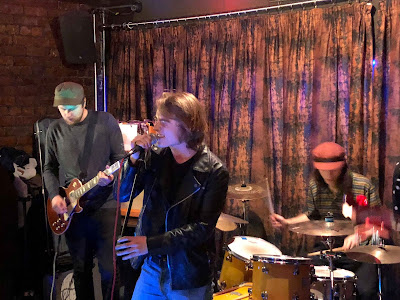 They've grown in confidence too. No longer does Charlie grip the microphone stand and not let go, he's wandering the stage, joining in on the drums and his voice is much stronger and vibrant to go with his stage persona and actually feels like it's more representative of who he is. The other Luke's drums are a revelation, holding the structures together and dictating the pace of songs like Again, which they tell us they break their record for playing the fastest. To us, it just felt like they'd added urgency to it.

What Dirty Laces have done in the past year is to change people's opinion on them, including mine (and anyone who knows me knows just how hard that is!). They're virtually unrecognisable from where they were a year ago when they didn't particularly stand out from the crowd. Now they've stamped their own personalities across their music, relaxed and become far more natural, developed as musicians and performers and become one of the most impressive young bands in town.