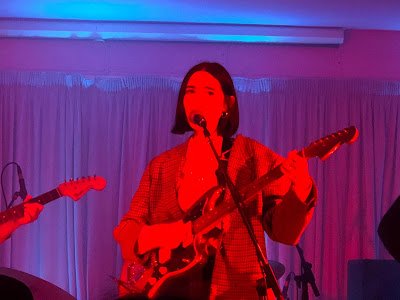 Julia Bardo played her "hometown" show in Yes's Pink Room in Manchester on Wednesday night to celebrate the launch of her debut EP Phase and to introduce new material as well as a cover of one of the most recognisable songs ever recorded.

There's a lot of love and support in the room for Julia. When she tells us Manchester is like home for her now because she can't go home to her native Italy, there's cheers but there's also a feeling of sadness at what it might feel helpless hundreds of miles from home. When there's technical difficulties and her guitar stops during The Greatest, there's nothing but sympathy and a roar of encouragement once it's fixed and she restarts the song.

The set starts with the five songs she's already released - Into Your Eyes and Please Don't Tell Me from Phase, followed by debut single Desire ("you will know this one" she tells us confidently) and then Lonely Morning and I Wanna Feel Love from Phase. The songs' lush arrangements on the EP aren't replicated live, the songs having a harder edge to them without losing the inherent beauty in them, much of which comes from Julia's showstopping voice that reminds you of timeless chanteuses from the sixties in the richness and depth she adds to the words she's singing and the mostly attentive Manchester audience fully appreciate that. This is more about slow seduction than lifting you off your feet and spinning you round.

The new songs, which Julia tells us are being written for an album, very much have the same vibe and feeling to them, even the unsetlisted The One that she plays solo at the end of the set. Goodbye Tomorrow, which precedes it, she tells us was finished on the day and she wanted to play it to see how it went down - and if she hadn't told us, we wouldn't have known, such was the effortless grace with which she and her band performed it. It's carried into her cover of Fleetwood Mac's Dreams, which she makes her own whilst remaining true to much of the original.

There are nervous giggles between songs that betray that she might not yet be as confident in the early days of performing live with her name above the door. They're quickly put to one side the minute she starts to sing and the audience are drawn into her web by her voice which sits at the centre of everything; familiar in many ways, but also sounding like no one else who is starting out making music these days.