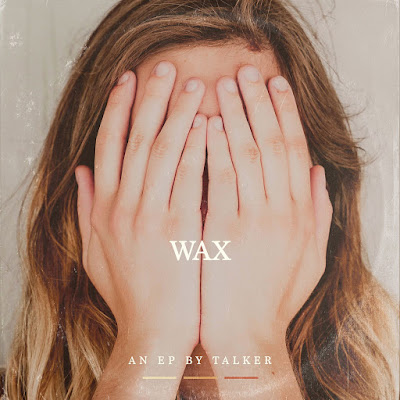 Wax is Los Angeles-based talker's second EP, a journey of self-discovery set across six tracks including previous singles Keep Me Safe, Learning The Feeling and Suck Up plus three new songs.

Break My Fall opens up the EP as a ninety-second introduction to many of the themes that Celeste (talker) investigates through the course of the five songs that follow. With a rich emotion in her voice you can hear the torment as she asks "would you please break my fall?" when she thinks she is going to hit the wall.

Learning The Feeling  is very much about the next stage of the healing process, finally being yourself, throwing off all the shackles that have kept you tied up in your emotions and anxieties and the feeling that you have to act a certain way to fit in rather than just be yourself. The music that accompanies lines such as "I'm kicking and feeling, blue in the face from keeping it in, I'm finally breathing" matches the positive steps of self-help that the song is championing.

Bad News drops back down in the darker recesses of the mind when you're lost and unsure of where you stand - "in my own worlds, my thoughts get the best of me" - but asking questions such as "you're the pavement I'm gonna hit, should I jump right now or wait until my fingers slip?" suggesting acceptance of what's going to happen next. Musically more restrained than what's gone before, it allows the cracking emotion in Celeste's voice to accentuate the intensity of the situation

Suck Up is a song of critical self-assessment, of working out where you stand in the world and which deals in all the self-doubt and uncertainty about which elements of the faces we all put on in different situations make up the real person and whether that will ever be good enough in your own mind irrespective of what others might think -  "I’m a thousand versions of myself when I wake up and I don’t think any of them will ever be enough"

Personal Space concludes the EP and deals with retreating into your shell and losing sense of who you are and what matters - "they all know my name, but don't let them inside" and "voices in my head, I'm sinking deep, easy to forget my thoughts and what I believe." It's a dark place, but one that most people will have been in at some point and the song feels like it's the counter to Learning The Feeling as it shows one of the other sides of the personalities that Suck Up describes so well.

When looked at as a whole Wax EP is a voyage of self-discovery, trying to work out who talker is in the context of the situations she finds herself in, reflecting that it isn't a simple process and there isn't one correct answer and every new revelation brings as many questions as it does solutions. It's delivered with an openness and honesty that will talk to others who find themselves in the same situation.