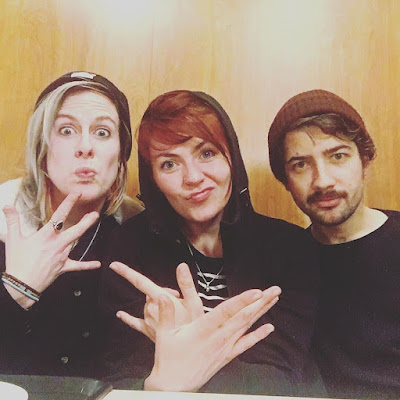 Rews are embarking on a UK tour in support of Monsters, the second track to be taken from their forthcoming second album. Ahead of their Friday show at Night People in Manchester we caught up with Shauna to talk about the single, the new album, line-up changes and what to expect when they come to town.

You’ve just released a new single Monsters. Could you tell us a little about the song and what it’s about?

Sure! It’s basically a song about challenging and taming ‘the inner critic’. In this age of social media, it’s become clear that we struggle in one way or another with self critical thoughts.  A lot of these thoughts are incredibly toxic and hold us back from being the best versions of ourselves and doing what we are meant to do!  I want it to be an anthem for people to know they’re not alone in the struggle and that they can accept and love themselves for who they are - we are all imperfect but beautiful in our own unique ways!

How representative is it of the sound of your second album that you’ve just finished recording?

It’s pretty accurate!  Monsters is one of the more poppy songs on the album but it maintains the same lively core and dynamic that the second album has.

Does it feel like there’s more pressure on you as the figurehead of the band now than there was when you released Pyro?

Not really! It feels pretty much the same as before as I’m doing all the same things. The only thing consistent in life is change and I’m pretty excited about the new album and playing with new people.

You’ve started a Sunday Acoustic Series performing acoustic versions of your songs that are very different from your recorded versions. What made you choose to reinvent the songs in that way?

Yes! It’s been really fun doing the Acoustic Series.  The main reason I started it was because a lot of Rews fans have been requesting acoustic cover versions.  I’ve reinvented them in this way because I thought it was about time to let people into the Rews creative process and how the writing comes together by performing them in their original guise.

You’ve been out on the road with The Darkness. How was that experience and did it feel like you could bed in the new Rews with less pressure?

It was phenomenal!! Loved every moment!  The Darkness guys and the crew were and are such lovely people and they welcomed us with open arms!  It was also great that their audiences came early and we got to play to a full house every night!

Ele and Scott are playing live with you now. How did you meet them?

They are yeah!  Scott has been a friend of mine for years, we sessioned in other bands together so have already got our flow.  We planned on doing other projects in the future so when this opportunity came up, I was delighted he was free to jump on board for some of the shows.  He’s hilarious too.  I met Ele through my Cornish friends (King Creature & Co), when we met, the electricity was instant and it’s such a pleasure playing with such a lovely, energetic, talented woman! ❤️

You’re about to embark on your own Phoenix tour. The name feels symbolic - is it making a statement intentionally?

It is symbolic in a way.  I suppose with everything that has happened over the last couple of years, not only in Rews but world wide, I really wanted to name the tour something that was representative of what was going on and to encourage people that change can be positive and can make you stronger - we grow through the journey.

What can we expect from the tour. Will it be primarily new material or can we still expect some old favourites from Pyro?

It’s a mixed bag.  When putting the set list together, I thought it would be nice to have a mainly Pyro-infused set peppered with new songs and an acoustic variation of a Pyro song too! Excited to hear what people think! 🤘🏼